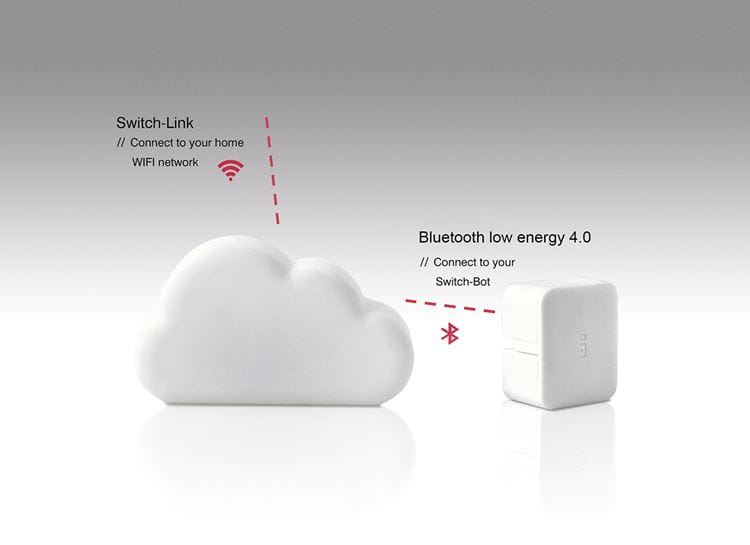 ‘SwitchBot’ from WonderLabs employs Nordic’s nRF51822 and nRF52832 SoCs for wireless activation of switches and buttons via smartphone, or, for remote operation, via SwitchLink gateway.

In operation, SwitchBot can be retrofitted with adhesive tape over any switch or button in the home―for example a light switch, or coffee machine- or PC-power button―allowing the user to wirelessly switch on/off the light or appliance via the SwitchBot app on their Bluetooth 4.0 (and later) iOS or Android smartphone or tablet. For operation away from home, SwitchLink allows remote operation of SwitchBot devices. Nordic’s nRF52832 SoC, which features -96dBm RX sensitivity, provides excellent Bluetooth LE wireless connectivity between the SwitchBots and the SwitchLink gateway, which in turn uses a home Wi-Fi network to connect to the Internet for remote operation from the smartphone app.

When a SwitchBot device is activated from the accompanying SwitchBot app, a mechanical trigger extends out of the device, and operates the switch or button in much the same way as a finger press. The SwitchBot app allows users to not only control an unlimited number of SwitchBot devices, but also provides the capability to set passwords, timers, as well as program ‘If This Then That’ (IFTTT) scenarios, for example turning off lights if the user is detected leaving a room.

The nRF51822 SoC ultra low power consumption was a key reason for its selection.

Connery Li, WonderLabs
To increase SwitchBot’s wireless range, the company has developed a Bluetooth LE-compatible mesh network software application enabling each SwitchBot to relay commands to multiple devices in the network that are out of range of the original smartphone signal.

SwitchBot is powered by a single CR2 Lithium battery, providing up to two years battery life in standard operation between replacement, thanks in part to the ultra-low power characteristics of the Nordic nRF51822 SoC.

“The nRF51822 SoC ultra low power consumption was a key reason for its selection,” says Connery Li, Co-founder & CEO, WonderLabs. “The flexibility of Nordic’s nRF51 and nRF52 Series software architecture, which separates Nordic’s SoftDevice from the application code, was also important because it made the development, compilation, test, and verification of our mesh network protocol much easier and quicker.”