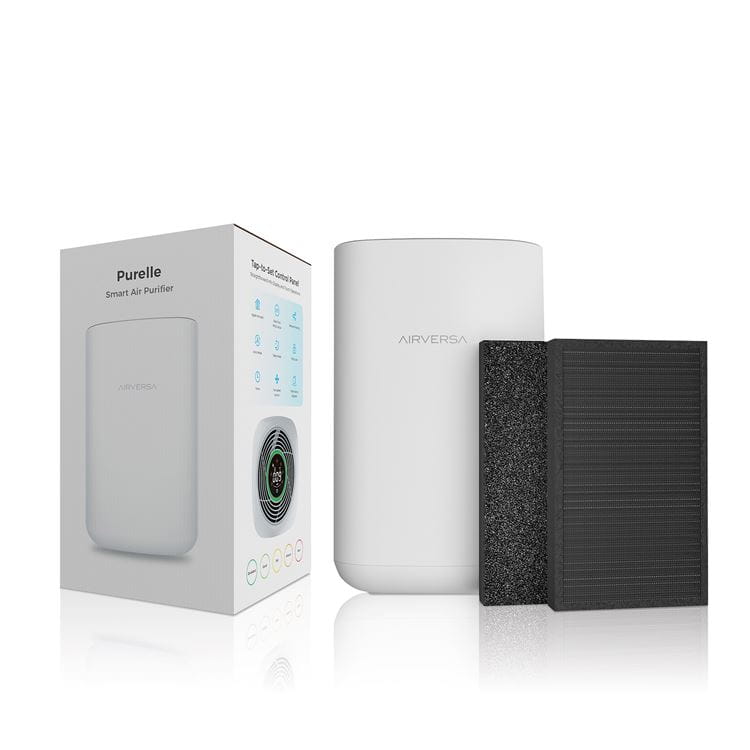 Connected appliances manufacturer, Sleekpoint Innovations, has released the ‘Purelle (AP2)’ under its Airversa brand, which specializes in creating air treatment products that improve the quality of the air we breathe. The smart air purifier takes advantage of Apple HomeKit® with Thread Accessory Protocol.

The air purifier uses a 3-Stage True HEPA Filtration system which is claimed to capture up to 99.97 percent of airborne contaminants and can filter out particles down to 0.3 microns (0.003 mm). The product is designed for compact tabletop use in small-to-medium sized rooms, and can be plugged into most household sockets via its AC adaptor.

Thread is a standards-based IPv6-based mesh networking protocol developed for directly and securely connecting products around the home to each other, to the internet, and to the cloud. Thread’s approach to wireless networking offers a secure and reliable mesh network with no single point of failure and support for low-power end devices. Every HomeKit with Thread accessory concurrently supports Thread and Bluetooth LE. Bluetooth LE is used to add a new accessory to a network and as a fallback option if there is no home hub supporting the Thread interface.

The nRF52840 SoC’s Dynamic Multiprotocol feature supports concurrent wireless connectivity of not only Thread and Bluetooth 5.3 but also Zigbee and other protocols.

“The combination of the nRF Connect SDK and Zephyr [RTOS] made the development procedure [of Purelle AP2] much easier,” explains Felix Liu, President and CEO of Sleekpoint Innovations.

“Additionally, we received excellent constructive and responsive support from Nordic, especially regarding HomeKit related issues. Unlike other top-tier chipset makers, Nordic’s corporate culture never overlooks the potential of a start-up, and has offered incomparable support throughout the process,” says Liu