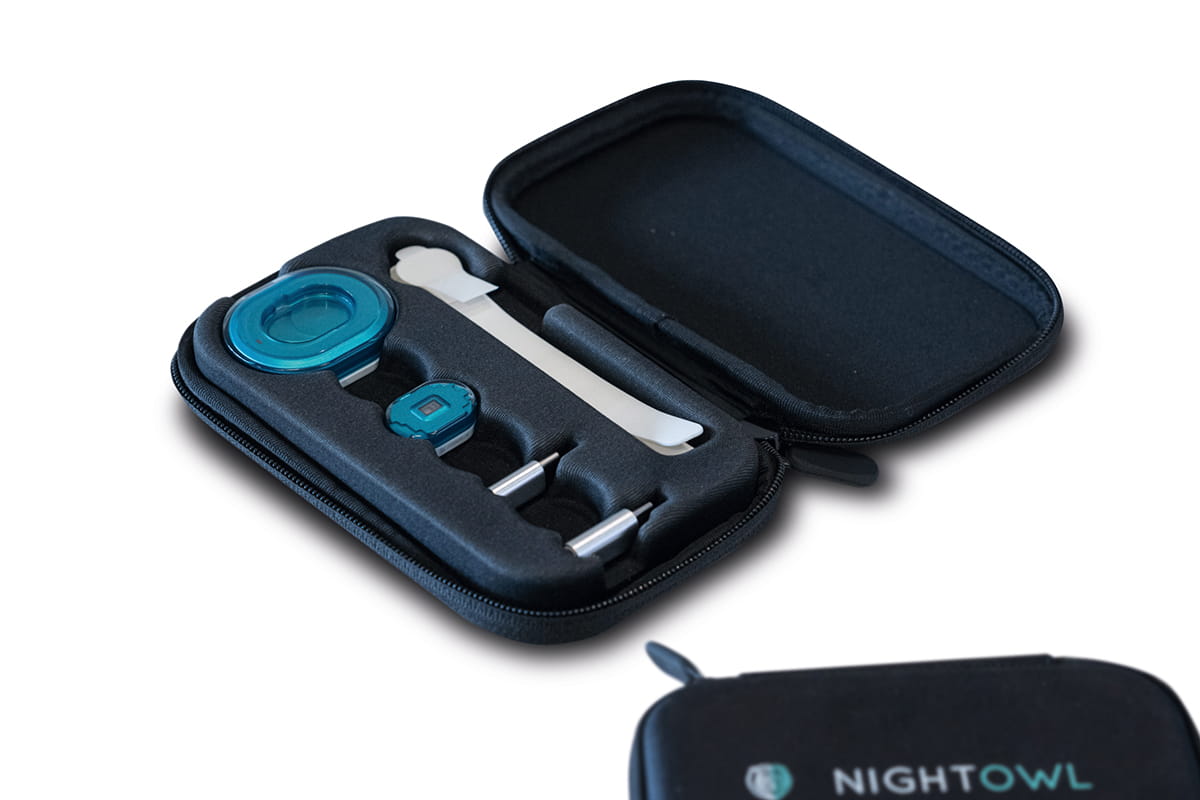 Problems sleeping can manifest themselves in not just unexplained fatigue but all kinds of secondary medical conditions and doctors have long sent patients to sleep labs to determine if sleep apnea is the cause. But in response to widespread sleep lab closures due to Covid-19, one medtech startup is claiming its Bluetooth LE finger-worn wireless sleep sensor is an accurate alternative for a fraction of the inpatient cost

Nordic Semiconductor today announces that Belgian medtech startup, Ectosense, is employing Nordic nRF52832 and nRF52810 Systems-on-Chip (SoCs) respectively in both versions of its state-of-the art, battery-powered NightOwl® home sleep testing wearable.
Following the closure of sleep labs around the world due to Covid-19, Ectosense claims its NightOwl sleep monitor is providing doctors with results just as accurate but at a fraction of the inpatient costs.
The NightOwl comes in two versions—either an advanced every 3-day rechargeable or a 10-night disposable—that both take the form of a small, wearable finger sensor. The device records ‘photoplethysmography’ (PPG) readings using a 50Hz optical reflective sensor. This shines light onto the finger and from the intensity of reflections determines, among other parameters, the oxygen saturation level of the blood (medically referred to as ‘SpO2’). Sudden changes in this blood oxygen level have been found to be the most accurate indicator of the presence of sleep apnea where an individual’s breathing stops temporarily while asleep. As this forces them to wake up it continuously prevents them from getting a good night’s sleep.

The Nordic Bluetooth LE SoCs helped the NightOwl to become not only one of the most accurate home sleep apnea monitors available on the market, but also the smallest

Wout Geeurickx, Ectosense
The optical sensor is supported by an accelerometer that can be used to pause monitoring to conserve battery-power if the wearer wakes up and starts moving about during a typical 8-10 hour night analysis period. Collected data is continuously streamed to a user’s smartphone via Bluetooth LE using a Nordic SoC and then processed in the cloud using what is said to give the NightOwl it’s professional sleep lab accuracy: a state-of-the-art sensor data algorithm developed by Ectosense CTO, Frederik Massie, that looks for sleep apnea events. Collected results are displayed on an on-line dashboard doctors can login to.
“We’ve long been trying to convince doctors that the NightOwl is as effective at detecting sleep apnea as some of the more traditional and clunky equipment used in medical sleep labs,” explains Wout Geeurickx, an Electronic System Design Engineer at Ectosense who designed all of the NightOwl’s hardware. “But medicine is a conservative industry and we were making slow but steady progress. The closure of sleep labs due to Covid-19, however, has seen many doctors forced to trial our NightOwl device until they can have their patients undergo a traditional all-wired sleep testing procedure again when the labs reopen. Our disposable variant also addresses an urgent need for devices free of contamination risk.”
Geeurickx says the Nordic Bluetooth LE SoCs helped the NightOwl to become not only one of the most accurate home sleep apnea monitors available on the market, but also the smallest. “This was extremely important because from day one we wanted the NightOwl to be as comfortable and unobtrusive as possible for users to wear so as not to interfere with their sleep and so affect the test accuracy. Although it required me to have many 3D nightmares in terms of optimal component and wire layouts, I am immensely proud of the fact that our device is finger-tip sized, completely self-contained, requires no external wristworn device common to our competitors, and feels like it weighs next to nothing when worn.”
According to Ectosense CTO, Massie, the size of the device could also prove crucial for another application. “The NightOwl is designed to accurately measure drops in blood oxygen levels, and these are proving to be a key indicator of a serious health deterioration in those unfortunate enough to have contracted Covid-19,” he explains. “As such we have received a large number of enquiries from around the world asking whether we could adapt and repurpose the NightOwl into a low-cost, medical wireless pulse oximeter to help protect hospitals and front-line medical staff fighting the pandemic. And this is something we are urgently investigating.”
“What we are seeing as hospitals and incredibly brave front-line medical staff around the world battle against the surge impact of Covid-19 is what was previously a three to five year horizon for medical device and IoT rollouts being pulled forward to now,” concludes Geir Langeland, Nordic Semiconductor Director of Sales & Marketing. “And it’s because the benefits of the IoT are turning out to be extremely relevant to defeating Covid-19. These include increasing operational speed and efficiency without sacrificing accuracy, and doing more with fewer resources including continuous remote monitoring and automated alarming and alerting, to mention but a few. And I’m just very pleased that IoT technology – including Nordic’s full range of wireless technologies – is here today, ready to deploy, at scale, and at a commercial and technological viability that simply did not exist even a few years ago.”
The NightOwl is both FDA and CE approved for medical home sleep testing. The NightOwl can also store data internally for specific ‘offline’ use-cases where the user does not have access to a smartphone.
SHARE