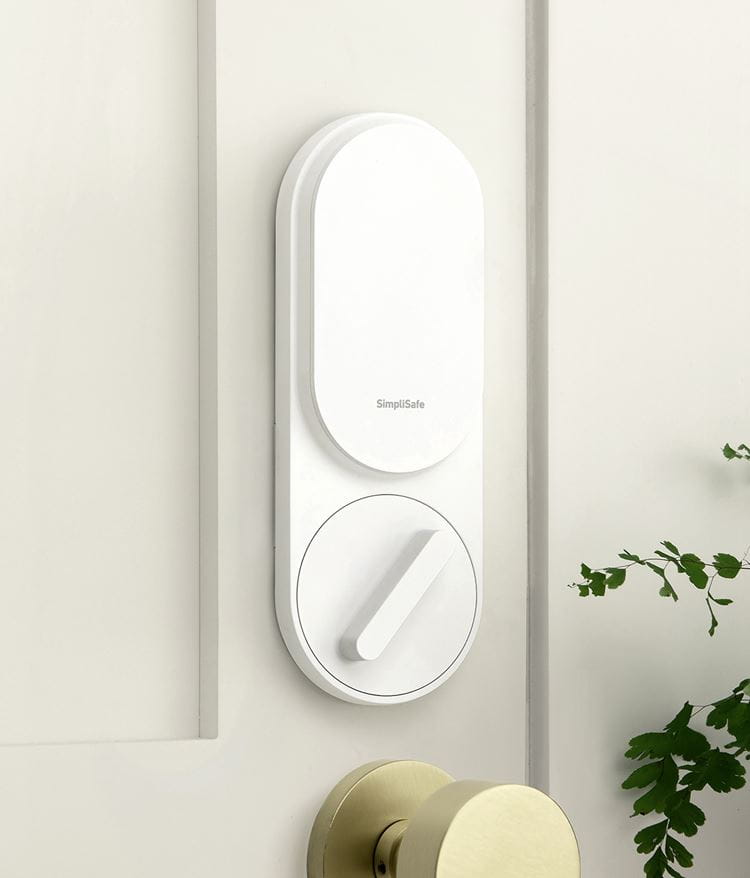 Nordic Semiconductor today announces that SimpliSafe, maker of award-winning security systems, has selected Nordic’s nRF52 Series multiprotocol System-on-Chip (SoC) to provide wireless connectivity for its ‘Smart Lock’ system.
The SimpliSafe Smart Lock is 23mm thick and easily installs over existing deadbolts without the need for power tools, and enables the user to lock or unlock their doors without keys. The Smart Lock integrates with the wider ‘SimpliSafe Home Security System’ which includes the ‘SimpliSafe Base Station and Keypad’ as well as motion sensors, entry sensors, smoke detectors, and a range of other detection devices.
Once the Smart Lock is installed it can be paired wirelessly with the SimpliSafe Security System, enabling the system to give commands to the lock when the user changes the system status. The system will also use sensor information to determine the behavior of the lock. For example, if the user has an entry sensor on the same door as the lock, the system can prevent the door from locking while it's ajar — to prevent damage to the door frame — and send a push notification to the user’s phone explaining why the door was not locked.

Nordic’s Software Development Kit, and the documentation and examples provided were extremely helpful and helped us accelerate development

Andrew Voris, SimpliSafe
The lock can be controlled via an exterior PIN pad, a SimpliSafe portable ‘Key Fob’, or the interior Keypad, as well as locked or unlocked from the ‘SimpliSafe App’ for remote activation. The SimpliSafe App also allows the user to view ‘events’ the system has recorded, the current status of the lock, as well as get notifications detailing when and how the door was locked or unlocked.
Nordic’s nRF52 Series SoC is deployed in the lock to enable secure over-the-air device firmware updates (OTA-DFU). The nRF52 Series SoC uses secure signatures to authenticate that only updates coming from a verified and trusted source can be made, while Advanced Encryption Standard (AES) offers strong protection, especially at the embedded level.
The Smart Lock is powered by four AA batteries, providing a battery life of up to 12 months in standard operation, thanks in part to the ultra-low power characteristics of the Nordic SoC. The nRF52 Series SoC has been engineered to minimize power consumption with features such as the 2.4GHz radio’s 5.5mA peak RX/TX currents and a fully-automatic power management system that reduces power consumption by up to 80 percent compared with Nordic’s nRF51 Series SoCs.
Nordic’s nRF52 Series multiprotocol SoC combines a 64MHz, 32-bit Arm® Cortex® M4 processor with floating point unit (FPU), with a 2.4GHz multiprotocol radio (supporting Bluetooth® 5, ANT™, and proprietary 2.4GHz RF protocol software) featuring -96dB RX sensitivity. The SoC is supplied with Nordic’s SoftDevice, a Bluetooth 5-certified RF software protocol stack for building advanced Bluetooth LE applications. The SoftDevice features Central, Peripheral, Broadcaster and Observer Bluetooth LE roles, supports up to twenty connections, and enables concurrent role operation.
“Nordic’s Software Development Kit, and the documentation and examples provided were extremely helpful and helped us accelerate development,” says Andrew Voris, an Engineering Manager at SimpliSafe. “SimpliSafe wrote its own application code using the Nordic SDK wherever we could, and in some cases it was possible to use examples from the SDK as boilerplate code, and then expand or modify the functionality as needed. Nordic’s fast response allowed us to get comfortable with the device and development environment early on.”
SHARE