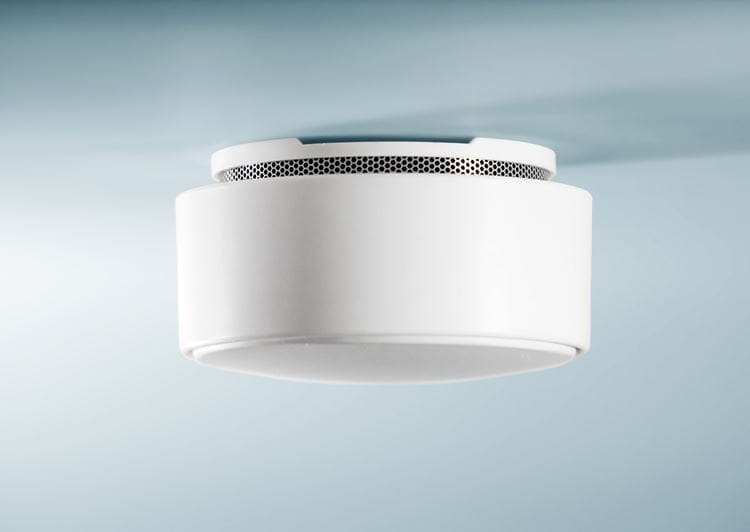 The "Point" is a camera-free, ceiling-mounted solution that employs state-of-the-art motion, temperature, patented sound recognition, humidity, and air pressure detection, and can be user-installed via a simple magnetic mounting plate in less than five minutes

Measuring just 85mm in diameter and 46mm in height, the Minut says the 180-gram Point eliminates both the need and intrusion of having multiple smart home alarm devices (apartments and small homes need just one). User privacy is said to be safeguarded too by a combination of processing all data locally on the device itself (so collected data never actually leaves the device) and not employing cameras.

“Whether you’re at work or away on vacation, the last thing you want to worry about is your home,” comments Nils Mattisson, CEO & Co-Founder at Minut. “With the Point you can relax safe in the knowledge that if anything out-of-the-ordinary happens you’ll automatically get sent a notification alert straight to your smartphone. Alert thresholds can also be user-specified, and the user can ‘check-in’ on the status of their home whenever they want.”

The Point provides a ‘watchful ear’ by employing patented sound-recognition technology that analyzes ambient noise in a home from ultra-low sub-Hertz to ultra-high ‘bat-level’ frequencies. This enables the Point to immediately recognize out-of-the-ordinary sounds such as smashed glass or other alarms going off in the vicinity. It can even alert nearby neighbors, friends, and family of an intruder detection.

I suspect many previously Wi-Fi-only products will add or even switch to cellular because cellular is even more reliable than Wi-Fi and eliminates the need for any kind of gateway which makes it much simpler for end users to install and set-up too.

“We selected the Nordic Semiconductor nRF9160 SiP because of its market-leading low power consumption and highly integrated size,” adds Fredrik Ahlberg, Head of Research & Co-Founder at Minut. “This has enabled us to achieve a battery-life of around six months using a small, internal rechargeable battery that can be charged via a USB-C cable. And even though we are a smaller company, the speed and quality of Nordic’s technical support enabled us to commercialize our first cellular-enabled product very quickly.”

At just 10 x 16 x 1mm in size, the Nordic Semiconductor nRF9160 SiP includes everything a cellular connection and IoT application needs beyond requiring just an external battery, SIM, and antenna. To achieve this ultra-high integration Nordic partnered with Qorvo to make a "System-in-Package" (SiP) that more closely resembles an integrated chip than a module. The SiP includes a powerful application processor (Arm Cortex M-33), standard microcontroller peripherals, and enough chip-integrated memory to execute IoT applications with edge computing. Yet this is not achieved by sacrificing on-air performance: the nRF91 is capable of delivering class-leading output power (+23 dBm) and sensitivity.

“Cellular IoT is a natural complement to many existing wireless products and is particularly relevant to security applications where it has often been used as the wireless technology of last resort in traditional intruder alarms,” comments Geir Langeland, Nordic Semiconductor's Director of Sales & Marketing. “But unlike traditional intruder alarms that are hard-wired into the mains, the latest LTE-M and NB-IoT low power cellular IoT versions of cellular wireless technology support battery-powered operation which is a bit of game changer. In fact, I suspect many previously Wi-Fi-only products will add or even switch to cellular. This is because cellular is even more reliable than Wi-Fi and eliminates the need for any kind of gateway to go on-line which makes it much simpler for end users to install and set-up too.”