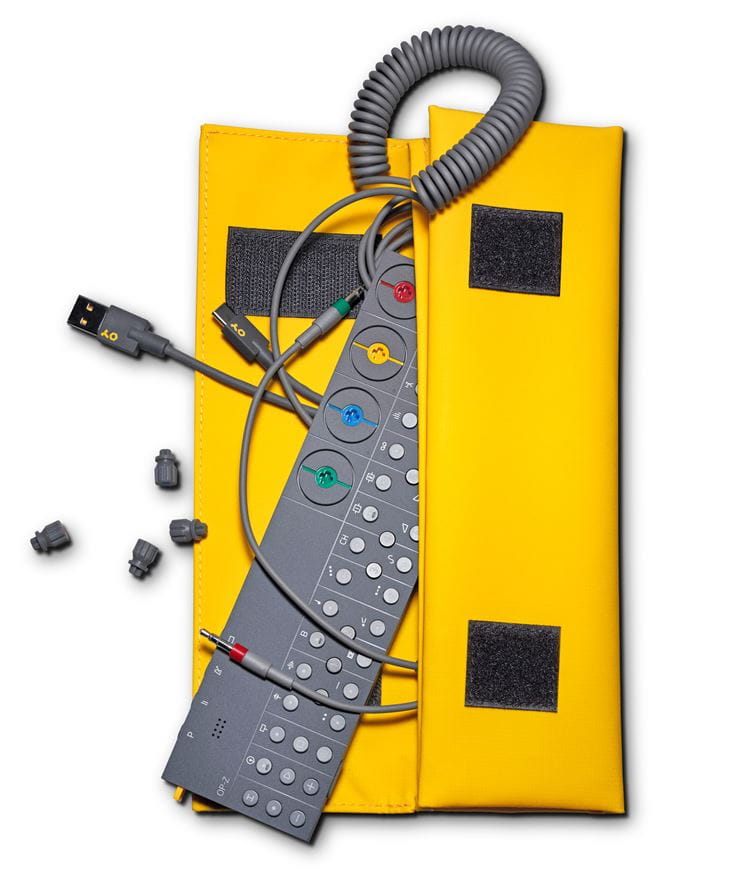 OP-Z is a portable Bluetooth LE-powered multimedia synthesizer that enables synchronized live composition of music, lights, and visuals. The lightweight (200g) device incorporates an advanced 16-track multi-speed sequencer, multiple synthesizer engines, microphone, and 6-axis motion sensor connected to an iOS partner app using MIDI over Bluetooth LE wireless connectivity provided by the Nordic SoC. MIDI (Musical Instrument Digital Interface) is a technical standard that describes a protocol, digital interface and connectors, and allows a wide variety of electronic musical instruments, computers, and other related devices to connect and communicate with one another.

Once the synthesizer is paired to the user’s Bluetooth 4.0 (and later) iPhone, iPad, or iOS computer via MIDI over Bluetooth LE, the OP-Z app enables the mobile device to function a graphical user interface (GUI). The OP-Z does not require its own display screen, allowing the product to shrink to a ‘pocket-sized’ 212.5 by 57.5 by 10mm form factor. From the app the user can create and control visual elements including an array of preset patterns, lights, and even instantly-sequenced images taken with the smartphone’s camera, as well as select inputs to the paired synthesizer to, for example, access parameter sweeps and configuration settings. From an audio perspective, OP-Z uses its in-built accelerometer and gyroscope to activate the microphone when the device is tilted.

OP-Z relies on the low power capabilities of the nRF52832 SoC to offer approximately one year of standby charge. The nRF52832 SoC has been engineered to minimize power consumption with features such as the 2.4GHz radio’s 5.5mA peak RX/TX currents and a fully-automatic power management system that reduces power consumption by up to 80 percent compared with Nordic’s nRF51 Series SoCs.

“Bluetooth LE connectivity enabled by the nRF52832 SoC offers a convenient and effective way for us to shrink the size of the OP-Z by using the high-quality display of the paired smartphone as the unit’s GUI,” says Jonas Åberg, OP-Z Architect at Teenage Engineering.