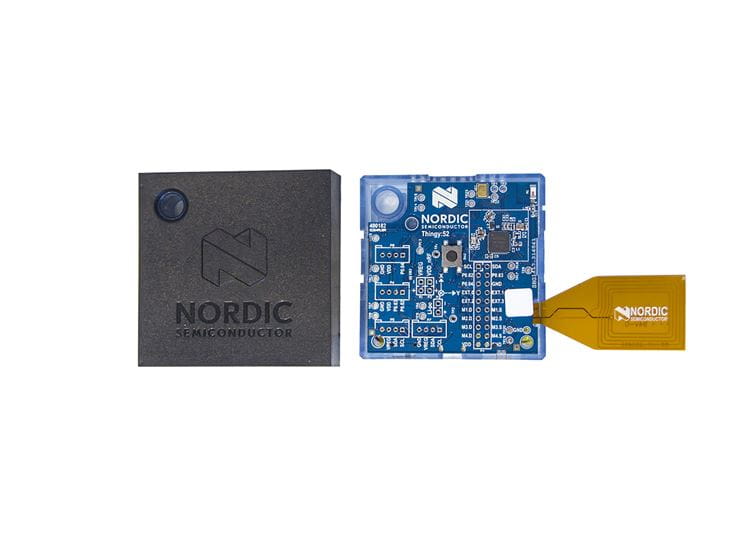 Nordic Thingy:52 enables an app developer with no firmware coding expertise or high-level development tools to quickly design and demonstrate Internet of Things (IoT) devices, and associated mobile device and Internet apps. The app developer can quickly and easily configure the development kit’s embedded application over the provided Bluetooth API from a mobile device.

The development kit is based on Nordic’s nRF52832 Bluetooth LE SoC which combines a 64MHz, 32-bit ARM® Cortex® M4F microprocessor with a 2.4GHz multiprotocol radio (supporting Bluetooth 5, ANT™ and proprietary 2.4GHz RF software), plus 512kB Flash memory and 64kB RAM. The nRF52832 SoC runs Nordic’s S132 SoftDevice, an RF software ‘stack’ that can support up to 20 concurrent connections in a variety of Bluetooth LE role combinations.

Nordic Thingy:52’s PCB is housed in a 6x6-cm plastic and rubber case which includes a USB connector to charge the device’s Li-ion battery. The development kit incorporates: a built-in digital microphone and speaker; movement sensor (nine-axis including accelerometer, gyroscope and magnetometer); ultra low power wake up accelerometer; and pressure, temperature, humidity, air-quality, and color sensors. Nordic Thingy:52 is supplied with example firmware, and iOS, Android and Web apps, all available in source code. For firmware developers it is possible and create customized firmware and program the board.

App developers can quickly develop IoT devices for a range of applications using Nordic Thingy:52. Altering parameters such as the air-quality sensor’s sample rate, or switching on the color sensor, for example, is simple to achieve via an over-the-air instruction from a smartphone or Internet app with no need to interact directly with Nordic Thingy:52’s firmware code.

It can also serve as a foundation to create more complex IoT applications, for example, we have seen early adopters use the NordicThingy:52 to change its LED’s color in response to voice commands directed at a personal assistant such as Amazon’s Alexa. The voice command triggers Alexa to contact a Cloud platform which in turn instructs an Raspberry PI to wirelessly forward the command to activate the Thingy:52.

Nordic Thingy:52 is the ideal development kit for app developers to testing out ideas and take advantage of the IoT’s potential.

The development kit works with the IFTTT platform. For example, a Thingy fixed to a door could report the door opening to a Cloud platform which then triggers a text to a smartphone. Or Thingy could be commanded to activate connected products such as Philips Hue smart lighting via the IFTTT platform.

“Thingy is the ideal development kit for app developers to testing out ideas and take advantage of the IoT’s potential,” says Pär Håkansson, a Product Marketing Manager with Nordic Semiconductor. “And because Thingy features a over-the-air Bluetooth API from mobile devices there no need for the app developer to go through the lengthy and complex process of learning how to use high-end development tools for firmware coding, debugging, and compilation.

“For a modest investment, app developers can start working with the Thingy straight out-of-the-box without needing any expertise beyond their app building skills. That enables a whole new group of highly innovative people to get their hands on a fully-functional, high-end Bluetooth LE platform and let their imagination run free.”

The Nordic Thingy:52 development kit is now available through Nordic’s distribution partners priced at around $40.