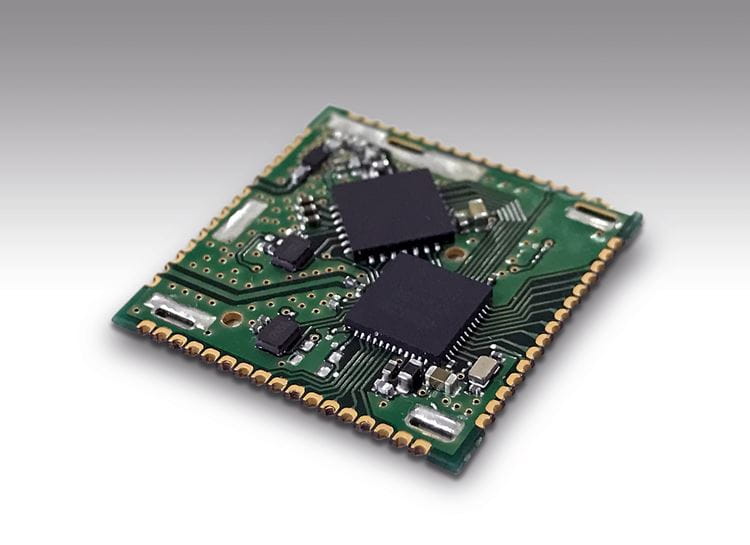 As well as providing a bridge between Bluetooth LE LANs and LoRaWAN networks, the module makes use of the nRF52832 SoC and S132 SoftDevice’s support of concurrent Bluetooth LE Peripheral and Central modes. The device can communicate simultaneously over the 2.4GHz (Bluetooth LE) and 920MHz (LoRaWAN) unlicensed Industrial, Scientific and Medical (ISM) bands. In addition, because the LoRaWAN application software is stored in the nRF52832 SoC’s 512kB Flash memory, it can be updated using the chip’s over-the-air Device Firmware Update (OTA-DFU) functionality, unlike with conventional LoRaWAN modules.

“For our application, the best feature of the S132 SoftDevice is its support for concurrent Peripheral/Central modes,” says Yasunari Kohashi, CTO and Vice-President, Braveridge. “This allows the module to dynamically change modes to facilitate the module’s function as a Bluetooth LE/LoRaWAN bridge.

“The SoC’s OTA-DFU functionality is also a key advantage because conventional LoRaWAN modules do not permit firmware updates after product shipment. With this module customers can update firmware in the field,” adds Kohashi. “Nordic’s SoC is designed by a team looking two generations ahead. Nordic have anticipated an engineer’s every need for firmware and hardware development in the future and offered a solution that meets those needs today.”

“The Internet of Things [IoT] will be built on complementary LAN and LPWAN wireless technologies,” says Geir Langeland, Director of Sales & Marketing with Nordic Semiconductor. “Braveridge’s module demonstrates how such technologies can work together in a single module with an nRF52832 SoC, providing the software, processor and memory resources, at its heart.”

For our application, the best feature of the S132 SoftDevice is its support for concurrent Peripheral/Central modes. This allows the module to dynamically change modes to facilitate the module’s function as a Bluetooth Low Energy/LoRaWAN bridge.

LoRaWAN is a protocol specification built on top of LoRa technology developed by the LoRa Alliance. It uses ISM bands to enable low power, wide area communication between remote sensors and gateways connected to the network. LoRa technology offers a mix of long-range (tens of kilometers), low power consumption (twenty-year battery life) and secure data transmission, according to the alliance.

The nRF52832 SoC features a novel software architecture featuring a unique and powerful separation between the Nordic stack and user application code. The precompiled, thread-safe stack is not included in the developer’s application compilations - significantly easing application development, verification and testing. According to Kohashi, Braveridge was able to speed up development of the LoRaWAN application code five-fold by using the nRF52832’s software architecture. Braveridge’s propriety LoRaWAN protocol is available to other developers working with Nordic nRF52 Series SoCs.