A pair of Moon Audio Opulence speakers will lighten the buyer’s wallet by a cool $1.1 million, according to What Hi-Fi. The specialist magazine reports that just ten pairs of the speakers were produced, and each boasted a rather ominous-sounding ‘Dark Star’ feature. The maker noted the speakers offer “an optional second way of experiencing [sound] which delivers music into the listener’s brain, bypassing the ears”. The company also helpfully suggested that the speakers were “not meant for an ordinary living room”. That’s likely not a problem for prospective buyers.

Consumers without the disposable income to buy a pair of the Opulences and with conventional domestic facilities still crave decent audio quality. Wireless headphones, while perhaps lacking the essence of Dark Star, offer a considerably more affordable, convenient and discrete solution. And, while demanding the owner has some actual ears, the sound quality of reasonably-priced wireless products is perfectly acceptable for anyone bar the most demanding hi-fi aficionado.

But superior wireless sound is only months away. LE Audio, launched by the Bluetooth SIG back in January 2020 and with key specifications following during that year, is approaching commercialization and will start appearing in earbuds and headphones in late 2022.

Those use cases mean LE Audio will not only improve the pleasure of music lovers, but will also bring families closer through Audio Sharing by allowing each member to watch the same film through their own headphones. Attendees at plays and conferences will also benefit. “With LE Audio, places like theatres and lecture halls will be able to provide high-quality audio in multiple languages,” said Peter Liu of Bose Corporation and member of the Bluetooth Special Interest Group (SIG) Board of Directors, in a statement. 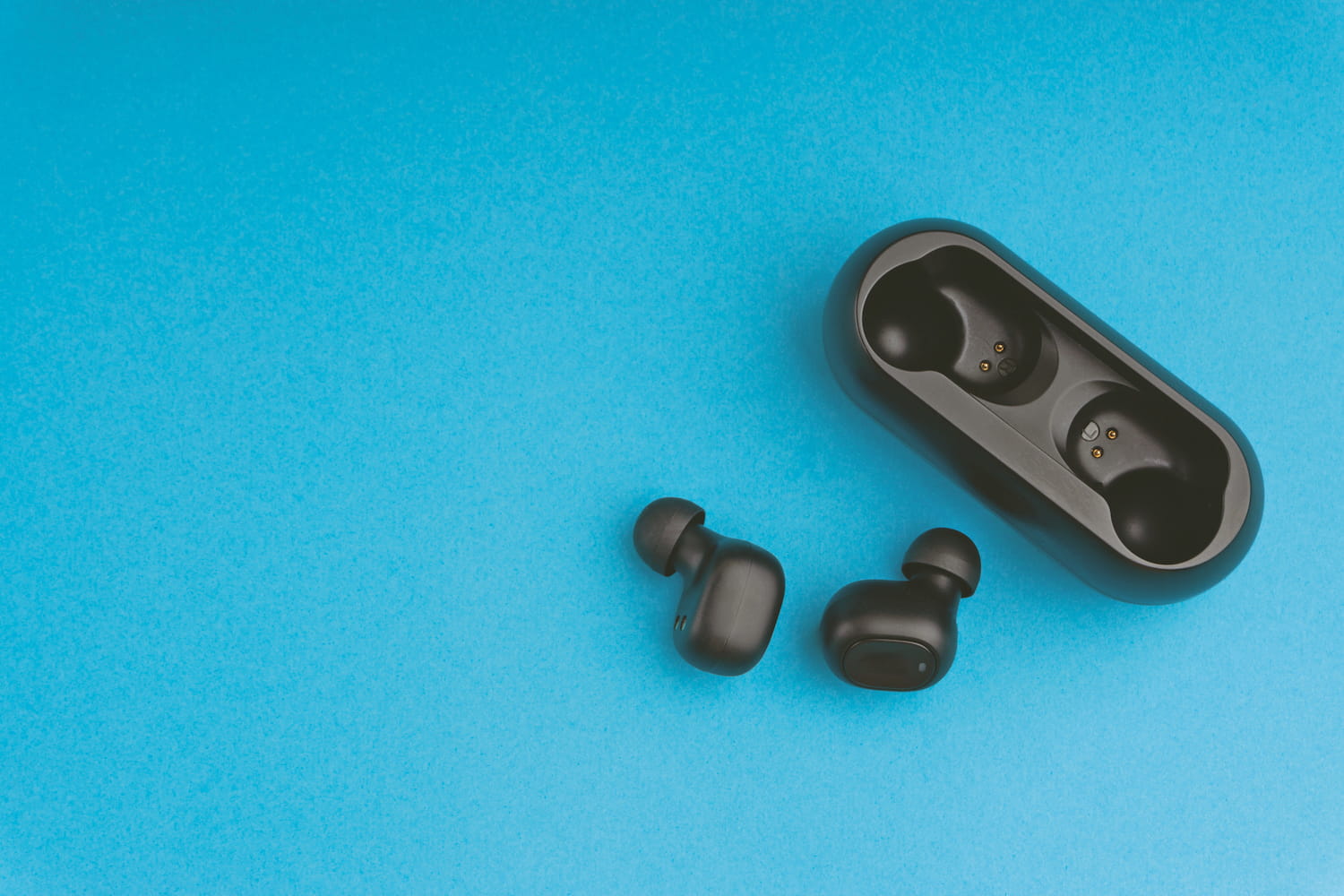 The invention of Thomas Edison’s phonograph—which used a needle to etch a groove which could then be played back by another needle following the groove’s indentations—was among the first devices that allowed for the reproduction of recorded sound. Grooves, first on wax with mechanical playback and then on vinyl with electrical playback, continued as the mainstay of recorded sound until after World War II. Post-conflict, the German invention of magnetic tape became internationally available and was adopted as the preferred media for original recordings. Tape lasted until the mid-1970s when the analogue era was brushed aside by digital recording using technology pioneered by Sony.

Today, the benchmark for high quality digital sound is the CD. But while the high bitrate of CD technology is still beyond the capability of audio streaming, it turns out that most listeners don’t care. They are perfectly happy with the quality delivered by the more modest bitrates supported by compressed audio formats that can easily be handled by wireless devices.

The Bluetooth SIG, custodian of the Bluetooth LE specification, introduced its own low-complexity sub-band codec (SBC) to boost audio quality at low-to-medium bit rates with additional firmware to customize the Bluetooth protocol for audio applications, back in 2003. Called the Advanced Audio Distribution Profile (A2DP), it facilitated audio streaming between two Bluetooth devices.

However, the SIG’s technology suffered from a few drawbacks. Among these was a channel limitation that only allowed the technology to stream audio to a single device such as the left-hand unit of a pair of earbuds. Engineers overcame the problem by processing the incoming Bluetooth audio stream in one earbud and then wirelessly retransmitting the second channel to the other earbud. The technique worked okay but was processor intensive and shortened battery life. Consumers demanded better.

A new lease of life

But it wasn’t the music lovers that commercial outfits were really listening too, rather it was the hard of hearing that kick started the development of better wireless audio. According to consultant Nick Hunn, in his book Introducing Bluetooth LE Audio, hearing aid users have always wanted to connect to smartphones and other Bluetooth-equipped devices, but the relatively high power consumption of Classic Bluetooth proved challenging. Hearing aids are worn for many hours each day and only have space for small batteries so low power consumption is critical.

In his book, Hunn explains that Apple launched a proprietary solution based on Bluetooth LE in 2013 which was then licensed to hearing aid makers. Unfortunately, the system was unidirectional and only worked with Apple’s own handsets. The Bluetooth SIG started work the same year on a Bluetooth standard for audio which would bring interoperability to the hearing aid ecosystem.

Today, the LE Audio specification features improved battery life compared with Classic Audio for all use cases. But because the technology allows engineers to further trade off audio quality against battery life, hearing aid applications where sound quality is not so critical as all day power, can gain a remarkable increase in battery life too.

Consumer audio companies soon realized that the hearing aid use cases were equally applicable to their market. LE Audio gained further momentum and the project expanded such that in the nine years since, the initiative has evolved into the Bluetooth SIG’s largest ever specification development project.

Finn Boetius, a Product Marketing Engineer with Nordic explains there are three key elements that have come together to push LE Audio towards commercialization. “First there was the addition of Isochronous Channels introduced as part of the Bluetooth 5.2 Core Specification, then the release of the Low Complexity Communication Codec [LC3] in December 2020, and finally the availability of highly efficient Bluetooth LE SoCs with powerful processors such as Nordic’s nRF5340,” he says. “And to help developers accelerate their LE Audio projects we’ve now introduced an nRF5340 Audio development kit which allows them to easily explore the technology’s potential.” 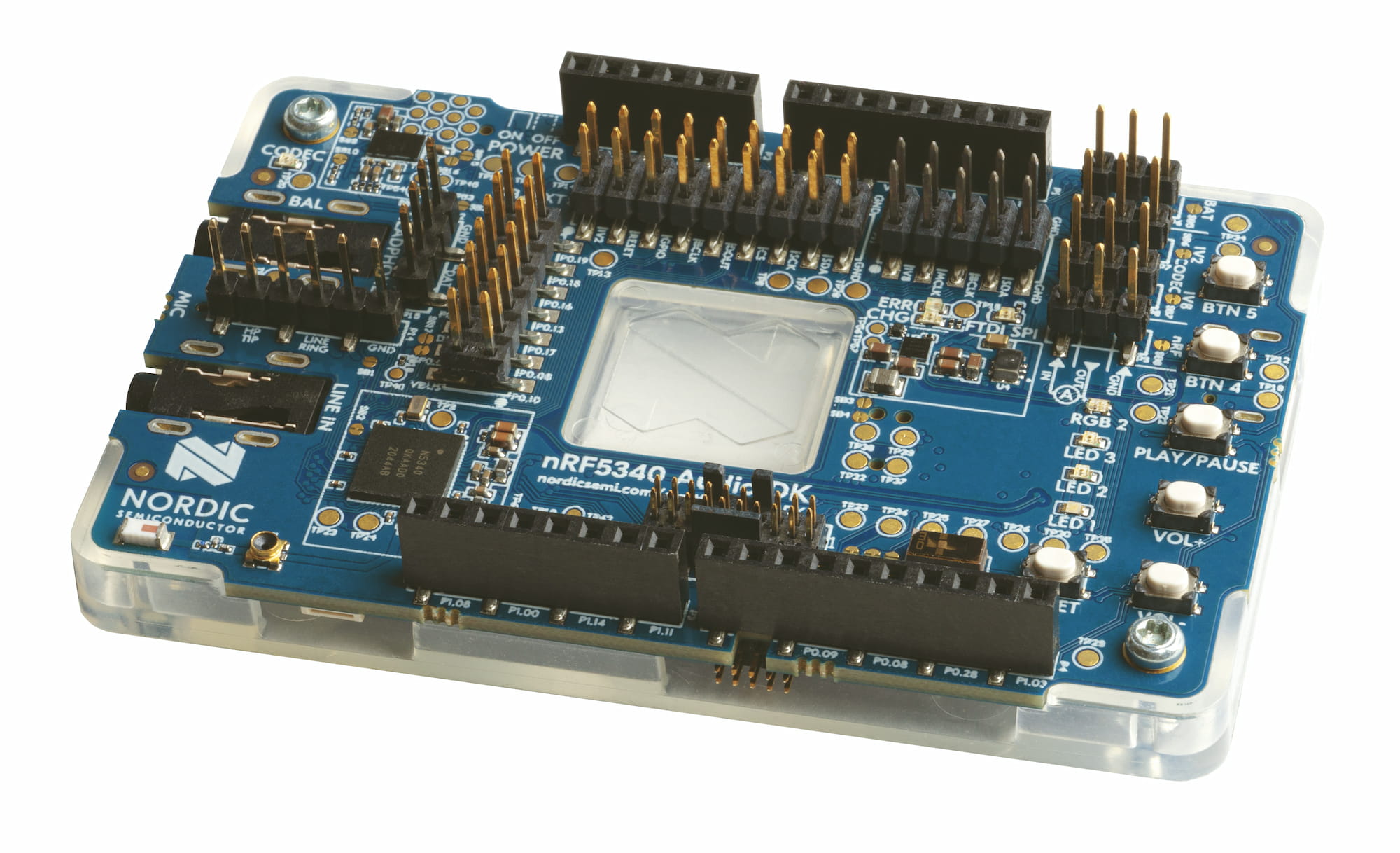 LE Isochronous Channels enables isochronous communication. This in turn allows multiple devices (for example, a pair of earbuds) to each receive their own unique audio stream. The channels are ‘time bounded’ so that the left and right channels retain the original precise musical timing upon replay. The result is excellent stereo sound but without the processor overhead that plagued Classic Audio and hence lower power consumption. The Bluetooth SIG has dubbed the technology ‘Multi-Stream Audio’. “It provides a better stereo imaging experience ... and makes switching between multiple audio source devices smoother,” says Nick Hunn.

While LE Audio benefits from Multi-Stream Audio for capabilities such as Isochronous Channels, it is LC3 that really underpins its striking combination of high audio quality and long battery life. In his book on LE Audio, Hunn notes that LC3 is one of the most advanced audio codecs available today, providing enormous flexibility and covering everything from voice to high quality audio.

That flexibility comes from LC3 being able to encode speech and music at various bitrates by supporting sampling rates of 8, 16, 24, 32, 44.1 and 48 kHz and sample resolutions of 16, 24 and 32-bits. It is this bitrate flexibility that allows developers to trade off sound quality against power consumption and in turn extend battery life or reduce battery size. Moreover, according to the Bluetooth SIG, extensive listening tests have shown that at all sample rates, the audio quality of LC3 exceeds that of SBC at the same sample rate, and provides equivalent or better audio quality at half the bitrate. Hunn explains that the practical benefit is the total size of LC3 encoded packets is around half of the size of those for SBC for the same audio stream, saving power. (There is an interactive listening demo powered by LC3, here) Hunn says designers probably don’t need to aim for the highest bitrates when striving for audio quality because other limitations in reproduction and the listening environment will likely mean few listeners will appreciate the quality gains they yield.

The LC3 codec is important to realizing the promise of LE Audio. Through highly efficient compression, the codec saves considerable energy while maintaining audio fidelity.

But on the debit side of the ledger, the codec demands processing power to run the compression and decompression algorithms on each side of the link. Previously, that threatened to negate some or even all of the codec’s operational gains, especially in compact products with correspondingly small batteries such as earbuds and hearing aids. However, a new generation of embedded Arm processors used in leading edge Bluetooth LE SoCs offers greater computational overhead to deal with advanced codecs such as LC3 yet at a much lower energy consumption than previous generations of chips.

Nordic’s nRF5340 is the definitive example of the leading edge in ultra low power consumption Bluetooth LE SoCs. Nordic has a hard won reputation for designing power efficient wireless SoCs and has taken this a step further with the dual processor architecture of the nRF5340. The nRF5340 features a dedicated Arm Cortex M33 application processor, optimized for performance and with ample overhead to look after high computational demands together with another M33 processor to supervise wireless connectivity. This second processor is optimized for low power consumption. The result is an SoC with the ideal combination of low power consumption and performance to meet the demands of LE Audio.

To accompany the SoC and to ease the development process, Nordic has released the nRF5340 Audio DK. The DK contains everything needed to get started with LE Audio projects. It can be used in different configurations, for example as an earbud in TWS applications or a broadcast receiver. For most use cases, for example wireless headphones, the designer needs to use two or more DKs, one to act as the headphone and one as the audio source.

LE Audio has taken years to reach commercialization, but now it is close. And it’s gaining serious attention. For example, Sennheiser, one of the world’s most renowned audio brands, says it will be using Nordic’s Bluetooth LE Audio technology in selected future consumer products. “We were looking for a reliable short-range Bluetooth LE Audio wireless solution for some upcoming products,” explains Stephan Lietz, Director Development Consumer Division at Sennheiser. “Through-wall range and reliability are very important to consumers, and was one of the many reasons we selected Nordic Semiconductor as our development partner.”

The result of this partnership, and many others like it, will be LE Audio-powered products not meant for an ordinary listening experience.