Wireless for wildlife: New tech could help save the forests

“If a tree falls in a forest and no one is around to hear it, does it make a sound?” Thanks to the emergence of innovative wireless conservation technologies, the response to this well-known philosophical question will soon be that someone, somewhere, will always be listening to the sounds made in a forest — even if they’re kilometers or continents away.

Everything that happens within designated protected areas of a tropical rainforest can now be closely and continuously monitored using sensor-based devices connected to Cloud platforms and smartphone apps over short- and long-range wireless networks. This capability in turn allows local authorities and conservationists around the world to identify and restrict human-driven threats to forests like illegal logging activity, as well as natural events such as wildfires, that might otherwise go unchecked.

Around a third of the Earth’s land surface is covered by forest, which in addition to providing food and habitats for wildlife and indigenous populations, crucially helps reduce the impact of climate change. Unfortunately, increasing global demands for food, materials and energy cause widespread deforestation and forest degradation. It all adds up to the decimation of forests and irreversible harm to terrestrial biodiversity.

Approximately 2.9 million km2 of native forest cover was lost from 1990 to 2015 due to clearing and wood harvesting according to a landmark report by the Intergovernmental Science-Policy Platform on Biodiversity and Ecosystem Services (IPBES). The report says 50 percent of agricultural expansion occurs at the expense of forests and ten to 15 percent of global timber supplies are provided by illegal forestry (rising to 50 percent in some areas). The same report suggests a seven percent reduction of intact forests occurred from 2000 to 2013 in developed and developing countries. Today, things are not getting any better; the World Wildlife Fund (WWF) claims on average, the world loses 75,700 km2  of forests annually — that’s the equivalent of 27 soccer pitches every minute.

Protected land zones represent a vital weapon in the global fight against deforestation. However, those on the front lines are struggling to successfully enforce borders, regulations and restrictions. For example, while conservation programmes and hard-working teams on the ground remain dedicated to the cause in the Amazon, about 17 percent of the world’s largest intact forest has been lost in the last five decades, according to WWF.

Clearly a protected status cannot save a forest on its own. But exciting innovations in environmental conservation-related technology have begun to join the battle. Wireless solutions, in particular remote monitoring systems, now offer some light at the end of the canopy.

One leading initiative in this market is the Code of Conscience proof-of-concept (PoC). Launched in September 2019 and led by global experience agency AKQA, Code of Conscience aims to support efforts to protect against illegal deforestation in protected areas. The solution is primarily designed to track the type of heavy-duty vehicles often used to rip through the forest in both legal and banned logging operations. 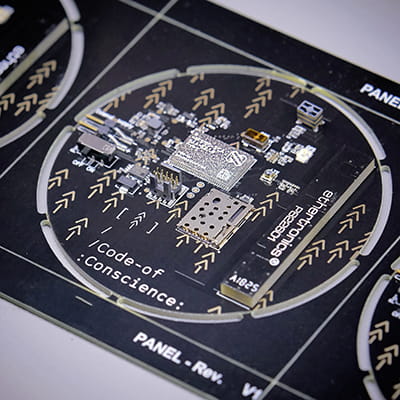 The Code of Conscience PoC

How does this PoC work in practice? Open source software uses publicly available, regularly updated, cached and compressed mapping data, in conjunction with existing GPS tracking technology installed in construction vehicles, to autonomously restrict crews from entering protected zones (determined by the UN World Database on Protected Areas). The open source software provides the GPS-based “geofence” capabilities which interlock with the fuel pumps of the machinery, enabling automatic shutdown if the equipment moves into a restricted area. Integrated cellular connectivity enables notifications and audits of the machinery’s position during normal operation and also provides a method of updating map data. A small, low-cost chip has also been developed to equip older, non-GPS vehicle models with the same code.

Code of Conscience has already been piloted in the Amazon. The project used Nordic Semiconductor’s Nordic Thingy:91 multisensor cellular IoT prototyping platform to demonstrate its PoC design for tracking forestry and agriculture vehicles, both on land and water. As an ‘out-of-the-box’ solution, the Nordic Thingy:91 allows OEM partners to easily integrate the technology into their machinery for future applications and remote installations. The next phase will see the collaborative attempt to transition the Code from PoC to adoption by building new key partnerships.

Another potential forest environmental conservation solution is based on a device that can highlight the dangers of deforestation to local communities by detecting loud sounds in forests. The unique device was developed by a student named Lyn, the North America winner of the not-for-profit Micro:bit Educational Foundation’s “do your:bit” BBC micro:bit challenge, inspired by the UN Global Goals initiative.

Using a Raspberry Pi computer with a connected camera and a microphone that communicates with the micro:bit (a Nordic SoC-based pocket computer), the system wirelessly relays an audio signal then automatically takes a photo and posts it to a public Twitter account. A local park ranger can then review the picture to determine the source of the noise—anything from the crack of lighting to something more sinister, for example, the buzz of a chainsaw—and respond accordingly.

Now when it comes to saving the forests, the individuals, organizations and communities looking to make a difference will be able to rely on technology providing remote access to actionable information and real-time alerts. Robust wireless networks will ensure these important messages are reliably received.