The Internet of Things (IoT) is a boon and a bane for many industries. By building an enormous network of wireless sensors we’re generating more data than ever before. But making sense of that data is an equally huge challenge, with the International Data Corporation (IDC) projecting that the IoT will generate no less than 79.4 zettabytes (one zettabyte is equal to a billion terabytes) of data within the next five years.

That makes the surfeit of information a double-edged sword. Greater volume and granularity of data promises more informed decision making - but only if we don’t drown in it first. Good management of the data is the deciding factor in determining whether we sink or swim. And that management starts by processing the raw sensor data at the edge to filter, refine and then prioritise what’s sent to the Cloud for further processing.

Sorting the information
In a near future IoT, edge devices will use AI to sort and collate sensor data, rather than just passing it on at high expense. “Communication with the Cloud carries a cost and power consumption overhead,” explains Steve Poulsen, President of U.S. embedded design consultant, Signetik. “’Small AI’ should be devolved to local edge devices while the ‘big AI’ is performed by powerful servers in the Cloud.” Poulsen explains that the benefit of this arrangement is that the local AI “reduces the data down to only what you’re interested in”.

Signetik is among the vanguard of companies commercializing AI technology for the IoT. It has recently developed a cellular IoT platform called SigCell that can perform AI-powered analysis of raw sensor data on Nordic’s Arm M33 processor-equipped nRF9160 SiP multimode cellular IoT product before it’s transmitted over the SiP’s cellular IoT link to the Cloud. 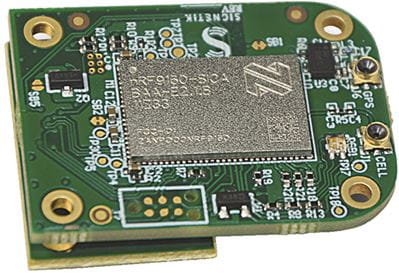 
But AI isn’t just helping process data at the IoT’s edge to filter out what’s important, it’s also helping engineers come up with new technical solutions, such as analysing user activity to refine and improve the efficiency of IoT device algorithms. And as many IoT devices are processor, memory and battery-constrained, this is a significant development.

One example of this process comes from edge-AI startup Imagimob. The company specialises in taking AI software and optimizing it such that it can run on the Arm M-class processor common to battery-powered IoT sensors and edge devices. For example, a system developed by the company employed an AI neural network to learn and interpret gestures which could then be used to control headphones without the need for traditional switches and buttons. It would be impractical to send the gesture data directly to the Cloud for analysis so all the processing has to be done locally by the headphones’ relatively modest electronics.

A tsunami of data
Today the IoT and AI are all around us but the changes being brought about by the technologies are so subtle that most people overlook them. It’s like we’re all standing on a slowly rising platform without realising it. But sectors such as healthcare, logistics, transportation, utility metering, retail payments, lighting, VR and much more besides are being continuously transformed by the IoT and AI.

That in turn means the amount of data generated by the IoT is set to increase exponentially. For example, analyst Gartner predicts that by 2021, the IoT will comprise 25 billion devices all generating round-the-clock information. To make any meaningful use of this data will require more than hard work and determination. It will require the dedicated, tireless focus that only AI can deliver. The impact on the AI sector will be dramatic. According to analyst Research and Markets, for instance, the IoT will represent 83 percent of all AI chipsets sales by 2023.

The IoT and AI are such a natural fit that their convergence is already leading to intelligent networks that are increasingly capable of solving problems without human assistance across a diverse number of industry verticals. And it’s likely that the “AI of Things” will become part of a bigger technological revolution that’s already underway and making use of parallel advances in fields such as robotics, quantum computing, autonomous vehicles and genomics.

In a near future IoT, edge devices will use AI to sort and collate sensor data, rather than just passing it on at high expense