Ahead of the Game

Coaches often say that ‘practice makes perfect’ and ‘you play the way you train’. In the aspirational world of sport, these mantras promote an ideal of what it takes to be successful. The message from trainers to competitors is clear - reaching your full potential takes 100 percent commitment and attention to detail, 100 percent of the time. While games aren’t played every day, good preparation never takes a break.

Yet until recently the process of continually analysing skills and techniques in order to track improvements could be described as hit and miss. From relying on empirical evidence and putting faith in what a coach sees with their own eyes, to scrutinizing video footage and eventually monitoring individual physiology and movement using sensor-based wearables, the widely available methods have either lacked a scientific foundation or had limited scope for providing valuable in-depth data.

In the past few years, however, the game has started to change. Wireless technology is now being incorporated into sports equipment, adding new dimensions to coaching and performance analysis at all levels of sport from junior and amateur participation to professional leagues. It has suddenly become possible to track, generate, review and learn from comprehensive data based on the precise location and movement of equipment and accessories in action. Whether it’s a bat, ball, boot, puck or anything else used to play sport or engage in physical activity, it can be designed to provide a wide range of advanced custom metrics that help boost performance. And all without compromising the natural characteristics and behaviours of the end product.

Wireless performance tracking solutions in sports equipment provide a constant flow of actionable feedback, allowing players to enhance one aspect of their game without it detracting from another. What’s more, tracking genuine progress helps athletes stay motivated to continue to push themselves.

This evolution in the sports market matters more than you might think. An athlete can hone skills for hours a day, a coach can implement the most challenging drills, but no amount of effort will lead to meaningful progress if the individual is practicing in a suboptimal manner. Reinforcing bad habits is naturally counterproductive.

When it comes to athletic development and the endless pursuit of perfection, information is most definitely power. And the latest sports tracking technology is able to serve up more powerful information, more efficiently and to more people than ever before. Tailored data-driven training is the future. In other words, only perfect practice makes perfect.

Bat and ball skills
Commercial solutions are increasingly emerging to capitalize on these capabilities in different sports around the world. For example, sports technology start-up, F5 Sports, has developed a Bluetooth LE-enabled smart baseball to help pitchers and coaches at any level of the sport. The pitchLogic system uses proprietary algorithms employing 15 channels of built-in sensor data to provide a set of 12 key body movement and pitch performance metrics after each individual throw. These metrics include ball spin rates, acceleration rates, launch angles and braking force. Thanks to Bluetooth LE connectivity, users can instantly access this information through a partner app on a paired smartphone, tablet or laptop, allowing the baseball pitcher to combine their muscle memory with actual data.

The pitchLogic platform: “helps players improve their game while reducing the number of practice pitches,” says David Rankin, CEO of F5 Sports. “Because the information is available within a second of each pitch, the very next pitch can be an improvement. This helps a player practice efficiently with measurable progress in each session and less time spent practicing the wrong way.” 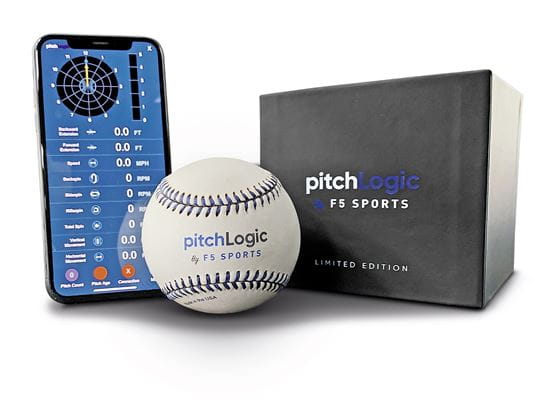 
Australia-based sports technology startup, Sportcor, is doing something similar. The Sportcor Smartball is an embedded sensor using an inertial movement system comprising two accelerometers, a gyroscope and a magnetometer, along with proprietary Cloud-based algorithms, to track movement data such as ball speed and spin rate. Like the pitchLogic baseball, the Sportcor Smartball delivers a variety of useful information and analytics about the precise behaviour of the ball to a smartphone or tablet app via a Nordic SoC enabled Bluetooth LE link.

The first commercial application of the product is a smart cricket ball developed by Sportcor in partnership with leading cricket equipment manufacturer, Kookaburra Sports. The two companies hope the ball will be adopted by cricket players, coaches, teams, leagues and broadcasters around the world for a multitude of purposes including infotainment and engagement. The amateur and elite bowlers alike will benefit from deeper performance analytics and will be able to experiment with different wrist positions, release points and delivery ‘actions’ to discover what works best.

Cricket is a game of ball against bat, and India-based sports technology company, StanceBeam, has also teamed up with Kookaburra Sports to develop a cricket bat sensor for both recreational and professional cricketers. Known as StanceBeam Striker, the device attaches to any cricket bat handle and uses its integrated sensors to capture the motion of the bat in action and record 360-degree batting performance data analytics in real time. The product then provides live analysis of the player’s batting technique and performance through the associated StanceBeam app. Metrics include backlift and downswing angle, speed at impact and ‘shot efficiency’ (a comparison between the maximum speed of the swing and the speed at impact with the ball). Using the companion app as a ‘virtual coach’, the player can easily review each shot ball by ball, recreate and analyse each shot in 3D, and access tailored drills to improve along the way. Users can also conduct a post session review, produce a summary report and even compare their results against peers or elite players.


StanceBeam Striker is ready for use in a competitive cricket match, where batters rely on their ‘timing’ and power to launch the ball over the boundary for six runs, particularly in the shortest format of the sport, Twenty20 cricket. Cricket is adored and played by millions of people across the Indian subcontinent, Europe, Africa and Australasia, so it’s not hard to imagine a future where smart balls and bats form part of a typical cricket kit.

Wireless winter sports
Wireless tech is also being used to expand the provision of metrics for winter sports enthusiasts who want to review their own skills and techniques on the slopes. Austrian ski equipment manufacturer, Atomic, in consultation with biomechanics experts, developed Hawx Connected, a Bluetooth LE ski boot and smartphone app that performs the role of a skier’s ‘digital coach’ and training log. The platform provides direct feedback and analysis of each individual ski run or session.

Based on sister company Suunto’s Movesense motion sensing platform, Hawx Connected features various embedded sensors to measure pressure at key contact points inside the boot liner and simultaneously detect turns and ski edge angles through the orientation of the boot. Once the ski boot transmits the Movesense data via Bluetooth LE to a paired smartphone, the user can instantly access all the insights through the Atomic CTD app. Any errors made on one run down the mountain can be rectified on the next or discussed in detail back at the ski lodge. As the company itself explains, the focus has shifted from being a: “ski equipment manufacturer to a skiing experience provider”.

From the snow to the ice, direction finding technology from Quuppa has helped software company Bitwise monetize its commercial package, Wisehockey—a player and puck tracking system—for monitoring professional games in the Finnish domestic ice hockey league, Liiga. Quuppa’s Intelligent Locating System is based on Bluetooth LE and accurately tracks the position of fast-moving objects, in this case individual players and a puck, enabling the Wisehockey platform to generate a wide array of data including time in possession of the puck, maximum speed and passing accuracy. The system works by locators around the arena receiving Bluetooth LE signals transmitted from tags in the puck. The positional data is then uploaded to a server and can be viewed by subscribers using a mobile app. Since custom information can be made available in seconds, this technology could one day be used by ice hockey teams and coaches to: “enhance tactics, training and performance on the ice,” according to Fabio Belloni, Chief Customer Officer at Quuppa. The tech could also be applied to other team sports like soccer, rugby and basketball.

Commercial viability
For such innovations to be commercially viable, they must be able to function effectively in match conditions and behave identically to the conventional equipment used in a sport. To achieve this goal, developers need the support of compact wireless technologies. The low power consumption provided by wireless protocols like Bluetooth LE allow for smaller batteries, so devices can be built with more compact form factors and integrated seamlessly into a range of specialized end products that will stand the test of time and frequent usage. Moreover, advanced low power wireless connectivity solutions, such as Nordic SoCs and their powerful processors, are able to support the complex applications running computationally intensive–and therefore power hungry–movement tracking, signal processing or direction finding algorithms. Generating useful data is one thing, but ensuring that data is readily available through low latency equipment-to-smartphone connectivity, over a decent range and for a reasonable amount of time before recharge, is the domain of Bluetooth LE wireless technology.

The pitchLogic baseball, for example, uses a rechargeable 40 mAH battery that currently achieves three hours of active use and 10 days of standby time before wireless recharge using Qi, a wireless charging standard that eliminates the need for a micro USB interface in the baseball. The Hawx Connected ski boot employs a Li-Poly battery that provides up to four-and-a-half days of operation in typical usage between recharge. This extended battery life is a major value-add for highly active skiers who spend long days on the ski fields, with performance data continuing to be recorded for as long as the ski boot maintains power.

For the Sportcor Smartball, developers placed a strong emphasis not only on battery life, but on the product’s ability to keep working for as long as the ball itself remains useable. After all, the average wireless device isn’t necessarily built to absorb a constant barrage of blows from a heavy bat.

“What we supply is a core that replaces the traditional core of a cricket ball. This includes the protective housing for the electronics to make sure they survive the impact of day-to-day use,” explains Ben Tattersfield, Founder of Sportcor. “Power management was crucial as we had to get a good life out of the Sportcor Smartball while also maintaining the smallest possible form factor and light weight to ensure we didn’t upset the characteristics of the end product, the cricket ball.”

What impact could these types of technologies have on the overall sports tracking and performance market moving forward? “Athlete engagement is the exciting part, in particular across the junior to intermediate levels of sport,” suggests Tattersfield. “Features that were only available to professionals are now available to almost everyone, including coaches in amateur and junior leagues.”

There is virtually no limit to the potential of placing wireless tech and sensors inside modern sports equipment. As further advancements are made in training, development and coaching methods at all levels of sport, innovators need only strike the right balance between providing useful data and successfully monetizing and democratizing their solutions. As such a new mantra, one fittingly borrowed from the worlds of business and technology, has emerged around the global sporting traps: work smarter, not harder. Thanks to wireless tech, perfect practice could soon be standard practice.