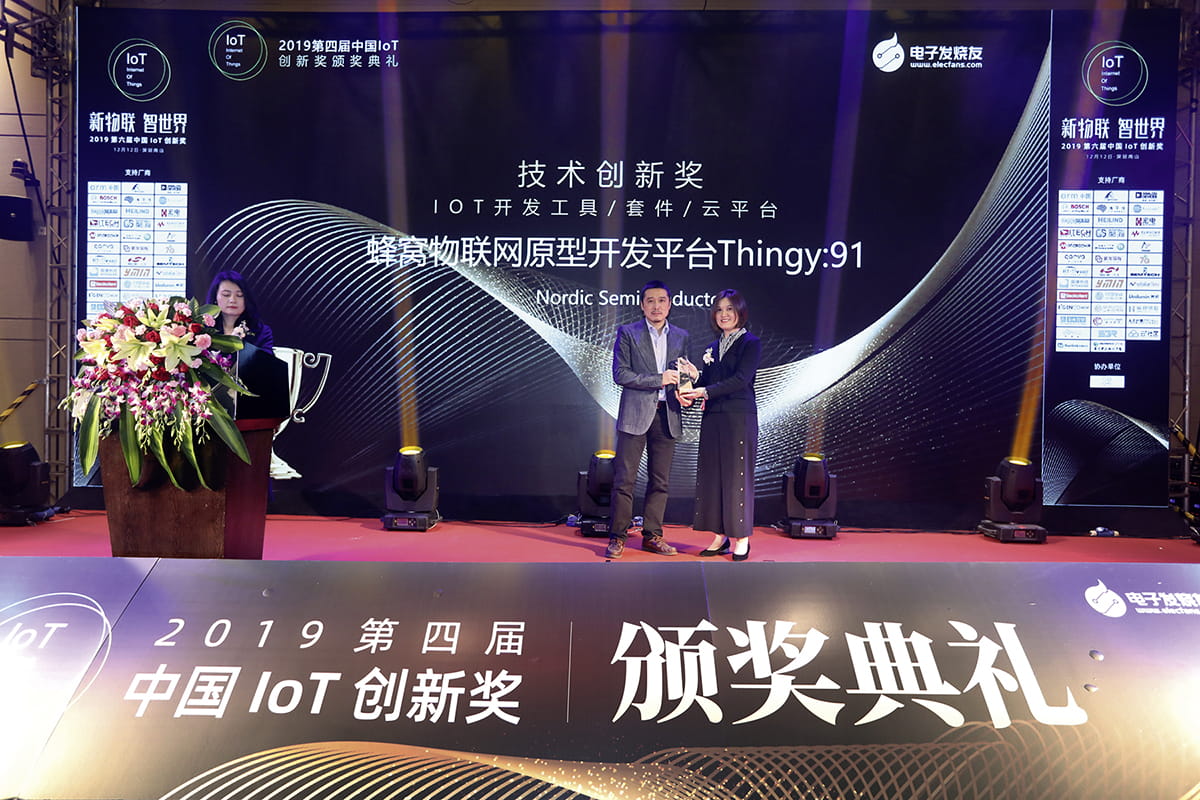 Nordic Semiconductor today announces that its ‘Nordic Thingy:91’ cellular Internet of Things (IoT) prototyping platform has been selected as the winner of the Technical Innovation Award in the China IoT Innovation Awards, 2020. It is the second year running Nordic has claimed the prized award, last year winning with its ‘nRF Connect for Cloud’ development tool.
Launched in 2016, the China IoT Innovation Awards, sponsored by industry magazine Elecfans, aims to discover and recognize pioneering leaders in the IoT industry whose technology has either made an outstanding contribution or far-reaching impact on the sector as a whole, or has been highly coveted by the market and individual users in the preceeding 12 months. Winners were selected based on judging by an expert panel and online industry voting on criteria including the product’s energy use, service life, reliability, ease of use, as well as data accuracy.

The Nordic Thingy:91 is aimed at both professional developers, and non-cellular IoT specialists and it is very gratifying to see it recognized by the expert panel of judges

Bjørn Åge "Bob" Brandal, Nordic Semiconductor
Based on Nordic’s nRF9160 SiP multimode LTE-M/NB-IoT SiP with GPS, the battery-powered Nordic Thingy:91 is a rapid prototyping platform for cellular IoT. It comes with a roaming SIM card, 16 sensors, and an asset tracking application for ‘straight-out-of-the-box’ operation. It also features Nordic’s nRF52840 SoC for a full range of complementary short-range wireless technologies.
“The Nordic Thingy:91 is aimed at both professional developers, and non-cellular IoT specialists and it is very gratifying to see it recognized by the expert panel of judges and end users alike,” says Bjørn Åge "Bob" Brandal, Nordic Semiconductor, Director of Sales & Marketing – APAC. “Not only does it allow developers new to the world of cellular IoT to get a proof-of-concept up and running very quickly, it also makes turning that proof-of-concept into a real product very straightforward, right down to using the same code and development environment.”
Recognized as the world’s leading Bluetooth® Low Energy (Bluetooth LE) semiconductor chip company, Nordic has today evolved into a wireless IoT company able to ‘connect anything’ via ultra-low power, short-range wireless technologies such as Bluetooth LE; or low-power, long-range wireless technologies such as the latest IoT-targeted version of cellular wireless technology, LTE-M and NB-IoT.
SHARE