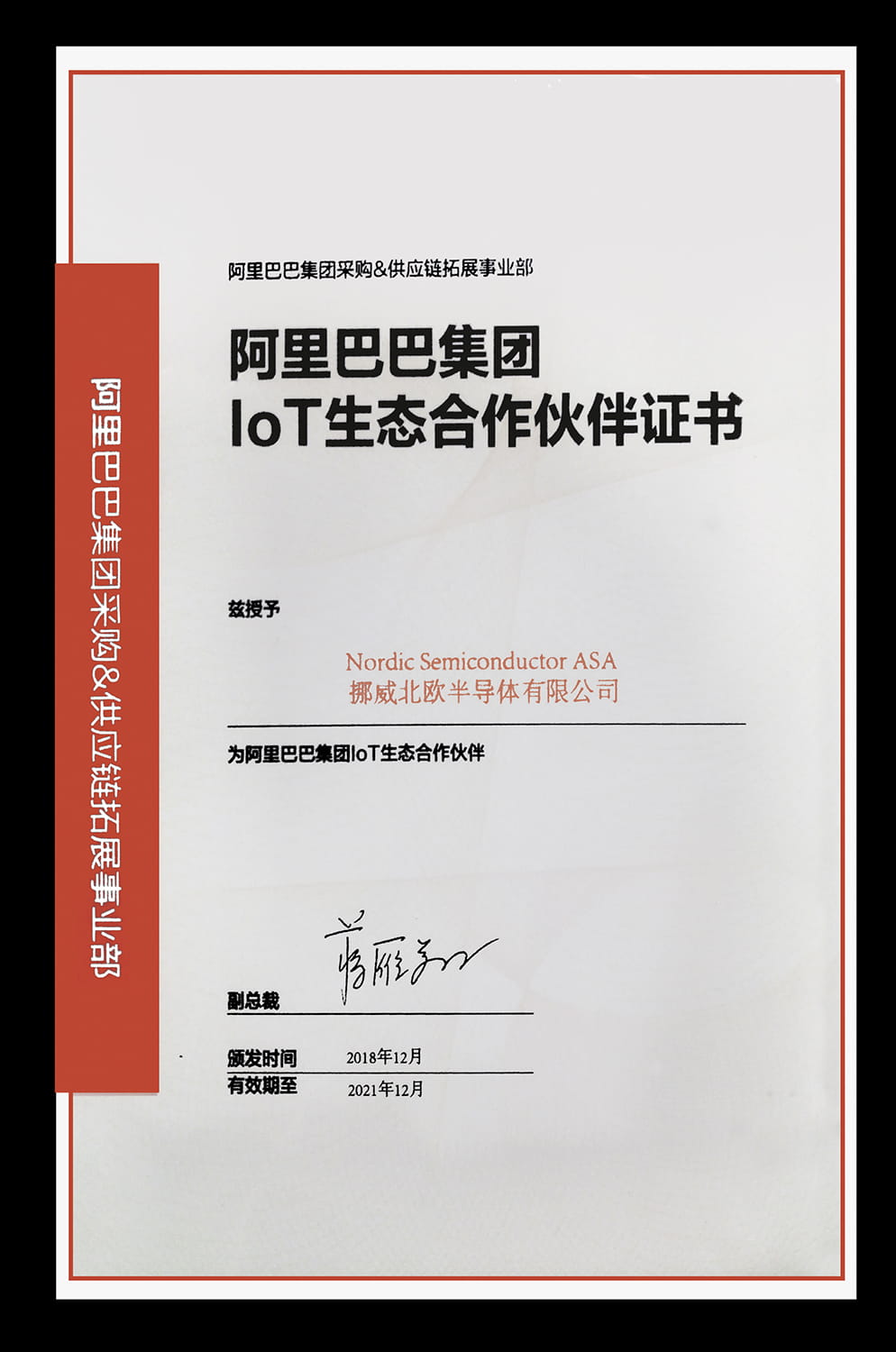 The Alibaba IoT Ecosystem Partner program is built on support for the AliOS Things OS, enabling developers to reduce the time and cost of IoT application development

We are delighted to have Nordic Semiconductor as a partner as it is a very well respected company that not only provides high quality products but also strong support for its end customers.

Wei Wu, Alibaba Cloud IoT
AliOS Things is a lightweight embedded IoT operating system (OS), dedicated to building an IoT infrastructure combining superior performance, ease of development, Cloud integration, rich components, and high levels of security protection to power the next generation of billions of smart ‘things’. The open-source OS offers the building blocks for a wide range of IoT applications, providing stable and reliable application support, enabling developers to reduce the time and cost of their development cycle.
Nordic’s nRF52 Series of multiprotocol SoCs is comprised of the high-end nRF52840 SoC, the mid-range nRF52832 SoC, and the baseline nRF52810 SoC. The nRF52840 advanced multiprotocol SoC, for example, supports complex Bluetooth LE and other low-power wireless applications that were previously not possible with a single-chip solution. The SoC combines a 64MHz, 32-bit Arm® Cortex® M4F processor with a 2.4GHz multiprotocol radio (supporting Bluetooth 5, ANT™, Thread, Zigbee, IEEE 802.15.4, and proprietary 2.4GHz RF protocol software), with 1MB Flash memory and 256kB RAM. Its Dynamic Multiprotocol feature uniquely supports concurrent wireless connectivity of the protocols. In addition, the nRF52840 SoC incorporates the Arm CryptoCell-310 cryptographic accelerator, offering best-in-class security.
“In 2017, Alibaba announced the IoT would become the fifth main business track for the group. We believe in the future of the IoT and will consistently invest in this market,” says Wei Wu, IoT Ecosystem Director, Alibaba Cloud IoT. “We are delighted to have Nordic Semiconductor as a partner as it is a very well respected company that not only provides high quality products but also strong support for its end customers. We expect to have more cooperation with Nordic in the future.”
“Nordic is delighted to have received certification for its nRF52 Series SoCs under the Alibaba IoT Ecosystem Partner program, which we see as an important step for the company and its customers in the push for a robust IoT,” says Wendell Boyd, Nordic Semiconductor’s Director of Sales and Marketing - APAC. “Developers are looking for the simplest solution to ensure their products are compatible with the IoT and Nordic’s partnership with a major global leader such as Alibaba Cloud IoT provides a proven alternative.”
SHARE