Nordic Semiconductor-powered micro:bit to be distributed to 100,000 primary schoolchildren in Norway 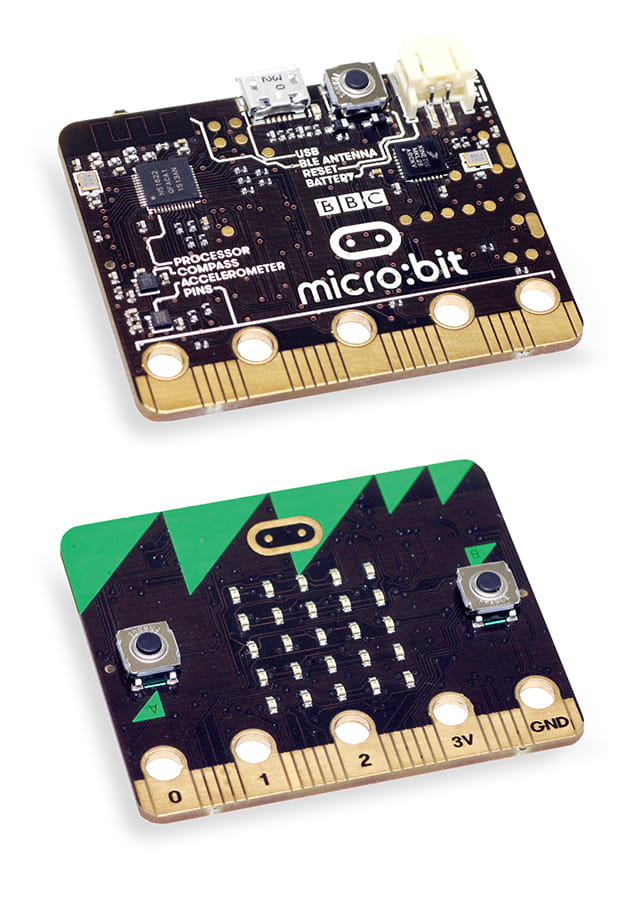 A four-year, NOK19.95m ($2.3m) program will see the tiny computer put into the hands of all year 5 to 7 pupils in Norway’s primary schools to stimulate interest in computing and the IoT

Nordic Semiconductor today announces that the ‘micro:bit’, a Nordic nRF51822 Bluetooth® Low Energy (Bluetooth LE) System-on-Chip (SoC)-powered, credit card-sized programmable computer for schoolchildren, will be distributed to 100,000 year 5 to 7 pupils in Norway.
A NOK19.95m ($2.3m), four-year program financed by Sparebankstiftelsen DNB, a Norwegian charitable foundation, will be administered by The Knowledge Center and Lær Kidsa Koding (LKK), non-profit organizations that teach children IT and coding skills, together with the country’s regional science centers. The micro:bit is also being made available to LKK’s 160 code clubs in Norway. The distribution will be accompanied by a training program for teachers and free online support.
The micro:bit was first developed by the British Broadcasting Corporation (BBC), a U.K. public service broadcaster, and key technology partners, including Nordic Semiconductor, Arm, Microsoft, and Samsung. It was designed to teach children coding skills and increase the number of students studying computer science at university.

Gareth Stockdale, Microbit Educational Foundation
Today, micro:bit is promoted by the Microbit Educational Foundation and is available to purchase from dozens of distributors across the world. The computer was distributed to a million ten and 11-year-olds in the U.K. in 2016, and 65,000 Danish schoolchildren in 2018. There are micro:bit activities in over 50 countries around the world and further national roll-outs are planned in Iceland and Croatia, among others.
“The micro:bit will provide a boost to programming education in Norwegian primary schools,” says Geir Endregard, Director of INSPIRIA, the organization responsible for the project on behalf of the country's regional science centers. “Children in Norway will now get a common tool that will help strengthen the connection between several key learning arenas such as a science center, school, and leisure. We strongly believe in this unique link between formal and informal learning.”
“Nordic Semiconductor was pivotal in the original development of the BBC micro:bit and remains pivotal to its success to this day,” says Gareth Stockdale, CEO of the Microbit Educational Foundation and a joint lead on the original BBC project.
“Nordic has been part of the micro:bit project from its inception so it’s gratifying for all the company’s staff to see this latest phase of distribution - particularly in Nordic’s own home country,” says John Leonard, Product Marketing Manager with Nordic Semiconductor and responsible for the company’s educational initiatives. “As suppliers of Internet of Things [IoT] technology we are keen supporters of the micro:bit as a means to encourage the engineers we’ll need to build tomorrow’s connected world.”
At the heart of the micro:bit is a Nordic Semiconductor nRF51822 SoC. Code written by the children runs on the SoC’s Arm® Cortex™ M0 processor, and the chip’s Bluetooth LE connectivity allows micro:bits to communicate with each other or with a Bluetooth 4.0 (and later) smartphone or tablet.
Nordic has already donated over 3000 micro:bits to code clubs, schools, colleges, and universities in Norway in addition to 2000 of the computers previously given to LKK. Nordic was also among the original group that lobbied for a distribution program in Norway similar to that which had taken place in the U.K. The company supports micro:bit clubs and educational institutions in North America, India, China, and Japan. micro:bit is also used for undergraduate courses at The Norwegian National University of Technology and The Natural Sciences (NTNU).
Nordic’s nRF51822 is ideally suited for Bluetooth LE and 2.4GHz ultra low power wireless applications. The nRF51822 is built around a 32-bit Arm Cortex M0 CPU, 2.4GHz multiprotocol radio, plus 256kB/128kB of Flash memory and 32kB/16kB of RAM. The SoC is supplied with Nordic’s S130 SoftDevice, a Bluetooth 4.2 qualified concurrent multilink protocol stack.
SHARE