When factory owners and industrial process managers decide they need to improve productivity, a hired consultant will often point them straight to the IoT. After all, the IoT can help pave a way to enhanced data generation and Cloud connectivity that leads to better decision making. There’s only one problem: The facility might be operating on wired systems that can’t easily be converted. Fortunately, there is now a simple solution.

For those struggling with the perceived complexity of the Industrial IoT (IIoT), the ability to deploy connected sensor/machine-based solutions requiring zero configuration has the potential to be a game changer.

TZero’s MachineMailbox connectivity tool is ready out-of-the-box to help industrial customers with remote compliance, equipment diagnostics and maintenance, and process optimization. Although vital, MachineMailbox is just one component of the overall IIoT solution. In addition to developing custom sensing solutions, such as the Sonic Density Sensor—used in fermentation monitoring or process chilling to monitor the health of fluid mixtures—TZero has built a data aggregating and processing backend that transforms the incoming sensor data into actionable intelligence.

“Very few people will purchase a drill for the sake of owning it; what one really wants is the hole. Likewise, raw sensor data is rarely the end goal in a complete solution,” says Eli Hughes, CTO of TZero Research and Development. “Instead of simply visualizing raw sensor data on a dashboard, we strive to build solutions that contextualize information into asset-based intelligence.”

In a brewery environment, for example, where critical level and temperature data would previously have to be collected manually, MachineMailbox can be deployed to enable fermentation monitoring. Using the solution, sensors in the brewer’s tanks collect data that is relayed to TZero’s proprietary gateway, and in turn to the Cloud using the LTE-M/NB-IoT cellular connectivity enabled by the integration of Nordic’s nRF9160 SiP. 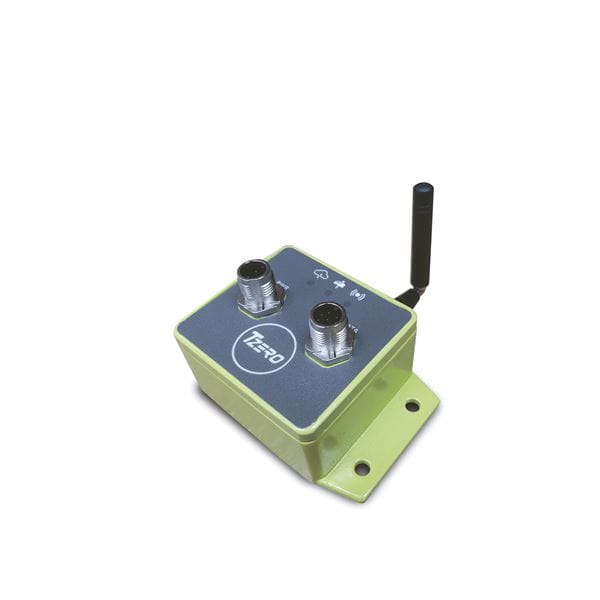 Hughes explains that for such a brewery solution, the company wanted the sensor and connectivity to “fade away” into the background. “The end user needs to know the status of the product in the tank,” he says. “By using cellular connectivity and Cloud computing we can distribute the workload by doing high speed computations at the edge, while calculating asset state and long term trends in the Cloud to give the user a true picture of what is going on in their process.”

MachineMailbox connects to external sensors via a wired full duplex RS485 data port, which allows for flexibility in servicing different applications. RS485 has a large installed footprint in industrial systems so, whether for legacy or new systems, the RS485 based system means MachineMailbox can be used in many scenarios.

Similar to placing items in a mailbox, the hardware can be configured to appear on an industrial network as a ‘sink’ where something else feeds in the data, or it can query attached devices. Using software configuration or a firmware change, MachineMailbox can then communicate using various wired protocols like Modbus (both client or server), BACnet, DMX or another custom protocol.

Once MachineMailbox sends information to TZero’s Cloud platform (deployed on Microsoft Azure), applications can be customized with additional processing, notifications and remote visualizations.

The previous iteration of TZero’s machine connectivity tool used Nordic’s nRF52840 SoC coupled to an external modem. However, when the nRF9160 became available, the company quickly migrated to the SiP for future IIoT designs. TZero favors cellular IoT connectivity over Wi-Fi, for example, because the industrial grade service offering needs to provide reliable wireless connectivity to transfer sensor data to the Cloud with no digital security limitations and minimal local configuration complexity for the end user.

“We believe in the power of parallel cellular networking to deliver connectivity solutions out of the box that are secure and easy to deploy,” says Hughes. “When working with customers that wanted solutions such as Wi-Fi, we always ran into two scenarios: A consumer grade Wi-Fi router that was unmanaged; or an enterprise with serious security policies. With cellular, we are putting a price on reliable, secure sensor connectivity, and it turns out to be much better value than Wi-Fi for many applications.”

In addition to providing LTE-M/NB-IoT connectivity for MachineMailbox data transmission, the nRF9160 SiP’s 64MHz Arm Cortex-M33 processor with 1MB Flash and 256kB RAM manages and performs the complex proprietary algorithms demanded by multiple sensors, as well as sending the data to the cellular network.

“The key hardware feature of the SiP was the integration of the Arm application processor with the cellular modem in a single package rather than [a separate processor] being coupled to an external modem,” says Hughes.

TZero also leveraged Nordic’s nRF Connect SDK based on Zephyr RTOS. “This provides higher levels of information from the modem component compared to other solutions and accelerates our future projects,” he adds.