For avid cyclists, the passion for riding is high, yet it comes with inherent risks and concerns. Their favourite bike is likely to be an expensive and desirable item making it attractive to thieves and in constant danger of being lost or stolen. Even the best locks and chains fail to prevent a determined pilferer.

And that’s not the end of the challenges; poor riding conditions can lead to spills, or worse, damage the bike owner’s two-wheeled pride and joy. There’s also the fear of being unable to contact loved ones following an accident in a remote location. In an effort to break this cycle of uncertainty, Northern Ireland-based cycling sensor technology startup, See.Sense, has developed what it claims is the world’s first NB-IoT cellular bike security tracker.

Performing like an electronic tag for a bicycle, the compact (65 by 50 mm), lightweight (80 g) See.Sense AIR protects and locates bikes anytime, anywhere. Once mounted discreetly under the saddle or below the bottle cage, the ‘fit-and-forget’ device uses See.Sense’s advanced sensor technology and GPS functionality to quickly and accurately detect whether the bike has been involved in a crash, moved or stolen. Riders are notified via an associated app on the user’s smartphone either via short range Bluetooth LE if they are within 50 meters or less or via the NB-IoT version of cellular IoT, a LPWAN wireless technology, if they are further away. 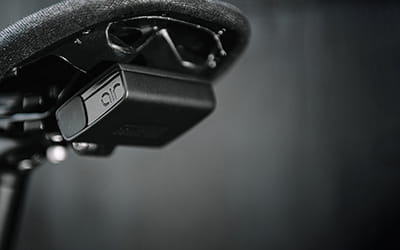 The See.Sense platform also ensures a better and safer overall riding experience by monitoring the surrounding environment to detect issues such as poor road surface and route conditions throughout a ride. What’s more, aggregated and depersonalized ride insights can be shared with See.Sense partners to improve conditions for cycling in cities around the world.

See.Sense AIR provides custom cycle protection modes based on the rider’s proximity to the device. In “Fight” mode, the always-on self defense setting, AIR sounds its built-in alarm if the bike is tampered with or moved. The user also receives an immediate SMS notification of the incident. Recognizing that the bike is being stolen, AIR then automatically switches to its “Flight” mode setting and rapidly transmits high-powered tracking signals enabling the bike’s location to be determined with an accuracy of just a few meters. In this situation, the owner can quickly pass on AIR’s GPS location to local law enforcement, significantly increasing the chances of recovery and return of the bike.

AIR can also help keep the rider safe by detecting if they’ve been involved in an accident and automatically sending an SMS alert with the precise location to an assigned emergency contact.

“Cyclists are fed up with bike vandalism and theft; it seems even the best locks and chains can’t stop a bike being damaged or stolen,” says Philip McAleese, CEO at See.Sense. “AIR was developed after listening to what the cycling community wanted. It’s a smart device, reacting automatically to its situation.”

A smart sensor solution like See.Sense AIR can only be as effective as the network coverage supporting it. Described by the company as the first bike tracking device to operate across an NB-IoT network—which trades-off low throughput for decent battery life—AIR allows users to locate and track their bikes from their smartphone for up to three months on a single charge of the device’s integrated LiPo battery.

“We narrowed the choice down to four criteria: Range; upload speed; power usage, and the suitability for use on a moving platform,” says McAleese. “NB-IoT was a clear winner, providing good range and upload speed at a reasonable power consumption. Testing quickly established that moving platforms also performed well. We found that NB-IoT also had fewer restrictions on duty cycles and data size than [competing LPWAN technologies], making it an appealing platform for AIR.”

See.Sense is based on Nordic Semiconductor’s nRF9160, a low power SiP with an integrated LTE-M/NB-IoT modem plus GPS. The SiP is certified for global cellular IoT applications.

“Nordic’s nRF9160 is an impressive platform with the ability to run our application from a single, small-sized unit and provide superb power consumption capability when idle,” says McAleese. “Unlike some NB-IoT chips, the nRF9160’s built-in ARM processor allowed us to run the firmware for the cellular modem off the SiP without the need for an external microcontroller.”

See.Sense’s technical team developed the complex firmware for AIR using Nordic’s recently released nRF Connect SDK with its expansive library of drivers and examples. “Nordic provides extensive information on all its chips, as well as fast and informative responses through the Nordic DevZone forum and incredibly detailed reference designs for prototyping and development,” adds McAleese. “Our engineers were able to seamlessly transition to the Zephyr RTOS used in the nRF Connect SDK thanks to the availability of amazing Nordic tutorials, webinars and support staff, allowing us to bring AIR to life at an accelerated pace.”