The AI of Things

The IoT generates so much raw data that traditional analysis methods struggle to cope. AI is the answer

Tens of thousands of companies have recognized the power of the IoT to solve previously intractable problems and move towards new ways of optimizing their businesses. Momentum continues to build because once one company gains a competitive advantage by successfully implementing IoT technologies, its competitors or counterparts are compelled to follow suit or risk being left behind.

The sensors, processors and wireless technology building blocks of the IoT have made it technologically and commercially viable to monitor, measure and ‘digitize’ almost everything and anything generating a constant stream of fine grained data. The pay-offs from this ‘big data’ are boosts in efficiency, convenience, safety, security and cost savings; the downside is data overload: “The IoT comes with the unintended cost of producing more data than that we can cope with, we are drowning in an ever expanding sea of the stuff,” says wireless IoT chipmaker Nordic Semiconductor’s CTO, Svein-Egil Nielsen.

But AI offers a lifebelt and it’s one the pioneering companies have grasped tightly. “I was presenting at an IoT conference recently,” recalls Nielsen, “and what struck me was that I was the only presenter there not speaking about AI.”

Nielsen’s views are echoed by professional bodies. According to CB Insights, when the analyst recently ran a study aimed at finding “the 100 most promising AI startups in the world,” it received applications from a staggering 5,000 AI startups spanning 13 countries and across 15 industries. And in its 2020 Emerging Jobs Report, professional networking organization, LinkedIn, stated that AI and data science roles are proliferating across nearly every single industry. (The organization suggests that when adopting IoT technology, AI is no longer optional and every company in the world will soon start recruiting. If you’re just starting out and want a career with healthy employment prospects look no further.) But how will AI resolve the data overflow from the IoT? The answer is in every way. AI is so much an integral part of the IoT that the network is fast becoming the ‘AI of Things’. But it is early days yet and while there are various flavors of AI of increasing sophistication that promise much, today there are a few key implementations.

The big and small of AI
“I would define AI in the IoT as any programmable intelligence that takes in data and then makes a decision based on that data,” explains Steve Poulsen, President of U.S. embedded design consultant, Signetik. “This allows measurements to be taken much more frequently and cost effectively because the AI reduces or eliminates the data overload and the IoT reduces or eliminates the need for a human to go out and do it. It also allows anomalies or trends in that data to be spotted more quickly and reliably.”

Signetik is among the vanguard of companies commercializing the technology and has recently developed a cellular IoT platform called SigCell that can perform AI-powered analysis of data on Nordic’s Arm M33 processor-equipped nRF9160 SiP multimode cellular IoT product. The edge-computing solution can perform full environmental sensing and Cloud connectivity.

“But when it comes to practical implementations for the IoT there’s a big distinction between ‘big AI’ and ‘small AI’. The difference is dictated by the complexity of the data coming in, the number of decisions being made on this data, and the amount of resultant data going out,” continues Poulsen. “Because in the IoT most communication with the Cloud carries a cost and power consumption overhead, you want to do small [simple] AI locally as much as possible and do all the big [complex] AI in the Cloud.”

Poulsen says that where small AI comes into its own is for filtering data at the edge. “If you put a sensor out there that simply collects data you will be collecting way too much,” he explains. “But if you put a small AI capability into that sensor you can reduce the data down to only what you’re interested in. In my experience, this is anywhere from 1 to 10 percent of what the sensor actually collects.”

Poulsen cites examples of small AI that his customers have implemented include detecting a sheep or cow’s head position to identify sick animals; measuring the ‘greenness’ of a plant to decide whether or not it needs watering; automatically identifying different types of weeds, and measurement of environmental data to predict occupancy and adjust energy usage. Signetik has even worked on a gunshot detection system designed for high crime inner-city neighborhoods that automatically alerts local law enforcement. Poulsen says that city inhabitants often don’t report such incidents making the data generated by automated systems even more crucial to law enforcement.

“AI and the IoT go hand-in-hand because the IoT generates too much data for a human to reliably and quickly analyze,” explains Poulsen. “At present we estimate around 20 percent of our customers use AI in their IoT applications and based on current trends we see this rising to over 50 percent within the next few years. However, we’ve been working on IoT applications for over 20 years – long before it was called IoT.

“What’s changed is the commercial viability of powerful but low-cost sensors and LPWAN wireless technologies as a means to collect data from them. The latter now includes cellular IoT for long distance LPWAN gateway-free connectivity. And cellular IoT is by far the best LPWAN wireless technology out there today, and the one we plan to standardize upon moving forwards.” 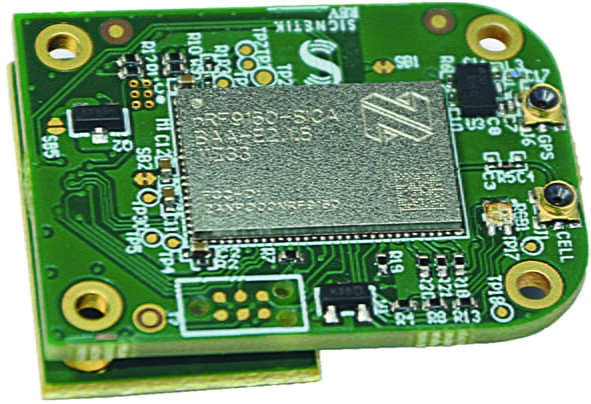 
AI for constrained devices
Another emerging use of AI in the IoT is where an advanced AI algorithm based on a neural network performs deep learning on particular activity such that it can be distilled in complexity and size to suit a battery-, memory- and processor-constrained IoT edge device.

The company partnered with radar technology company, Acconeer, on the project. The system uses Acconeer’s A111 Pulsed Coherent Radar (PCR) sensor. The A111 radar sensor is optimized for high precision millimeter-level distance ranging and physical detection and features a small footprint and ultra-low power consumption. Inside the headphones the A111 radar sensor is housed on a module called the XM122 IoT Module (that also incorporates Nordic’s nRF52840 advanced Bluetooth LE SoC) and is claimed to be the world’s first radar system that can run on a coin-cell battery.

“The goal for this project was to create a low power embedded application that could accurately classify five different hand gestures in real time using radar data, with one of the gestures being used to wake up the application,” explains Hardebring.

“Gesture control may not seem like much, but to get to a level where the performance feels like it ‘always works’ requires extreme precision. This is why in this application radar was selected.”

Hardebring explains that this level of precision also requires a lot of real time data collection and processing. “On a pair of battery powered headphones you wouldn’t want to send this amount of data up to the Cloud in a million years,” he says. The solution is to perform the processing locally so that the data doesn’t have to be transmitted.

“We used an in-house developed AI neural network algorithm to study and learn how a diverse range of people gestured and to spot the subtle yet critical differences and similarities,” explains Hardebring. “This resulted in a high accuracy headphone gesturing model that we then run through our company’s flagship software.”

That’s impressive, but the really clever bit of Imagimob’s technology is that the company can take a big AI model of any kind and turn it into highly-optimized software capable of running on a resource-constrained device such as a low power Arm Cortex M4 (the same device as the one used in the Acconeer module in the headphone application). For example, while today the application is gesture control, tomorrow it could be an air quality sensor powered by an Arm M-class processor designed to invoke congestion charging when it observes anomalous nitrogen oxide (a component of vehicle exhaust emissions) readings.

The hidden revolution
“It’s still the case that when you mention the IoT or AI most people see it as something futuristic and revolutionary, something that hasn’t really started yet,” says Nordic’s CTO, Nielsen. “I couldn’t disagree more strongly. I see the IoT and AI all around us in all kinds of applications that don’t necessarily scream out for attention so are easy to miss.

“To me the IoT and AI are like standing on a giant platform that is slowly but steadily rising into the air such that it lifts everything and everyone but so subtly nobody notices.

Nielsen cites many examples, including speech and voice recognition, digital assistants, healthcare, logistics, transportation, utility metering, retail payments, lighting, industrial automation, sports and fitness, toys and gaming, VR and AR and automotive. “It’s all being transformed by the IoT and AI right now,” he says. Nielsen notes the example of his home city of Oslo—which was voted European Green Capital for 2019—that has smart garbage cans. These have sensors that can automatically detect when the bin is full which eliminates unnecessary visits from garbage trucks while optimizing collection routes so fewer kilometers are driven. The bins are emptied much more quickly when they are full too. “This cuts collections costs, cuts pollution, cuts the unpleasant smell and litter caused by over-full bins,” notes Nielsen.

A further example of where the IoT and AI might soon go comes courtesy of trade magazine, EE Times Asia, which recently reported how a Taiwanese startup, OmniEyes, is applying a combination of computer vision and AI to the usually discarded footage collected from consumer dashboard cameras to automatically detect incidents of dangerous driving. Such information could be a boon for insurance companies which could then encourage safe drivers and punish risky ones.

This is only the start
“All we’re hearing is data, data, data,” said Steve McLaughlin, Dean of U.S. Georgia Tech’s College of Engineering, in an IEEE Spectrum article. “Every company in every sector is essentially telling us, ‘we’re not an energy company, we’re a data company now’, ‘we’re no longer logistics [or] an automaker – we’re a data firm’. That’s what’s taking up every bit of oxygen.”

Every sign to the future is pointing the same way: The IoT is going to be the biggest source of data and it will generate mountains and mountains of it. For example, a recent forecast from International Data Corporation (IDC) estimated there will be 41.6 billion connected IoT devices, generating 79.4 zettabytes (ZB) of data by 2025. The industrial (and automotive) category will see the fastest data growth rates over the forecast period with a CAGR of 60 percent. AI is probably our only hope of making meaningful sense of it all.

Whether we one day add the ‘IoT’ or ‘AI’ revolutions to the industrial and computing ones remains to be seen. But the IoT and AI are such a natural fit that the AI of Things is already forming. And it’s equally possible that the IoT, AI and big data may only be a part of a bigger technological revolution that’s already happening and also making use of parallel technical advances in fields such as robotics,communications and genetics.

However, as this revolution develops, exciting—and in equal measure challenging—times are ahead.

“The IoT comes with the unintended cost of producing more data than that we can cope with, we are drowning in an ever expanding sea of the stuff”