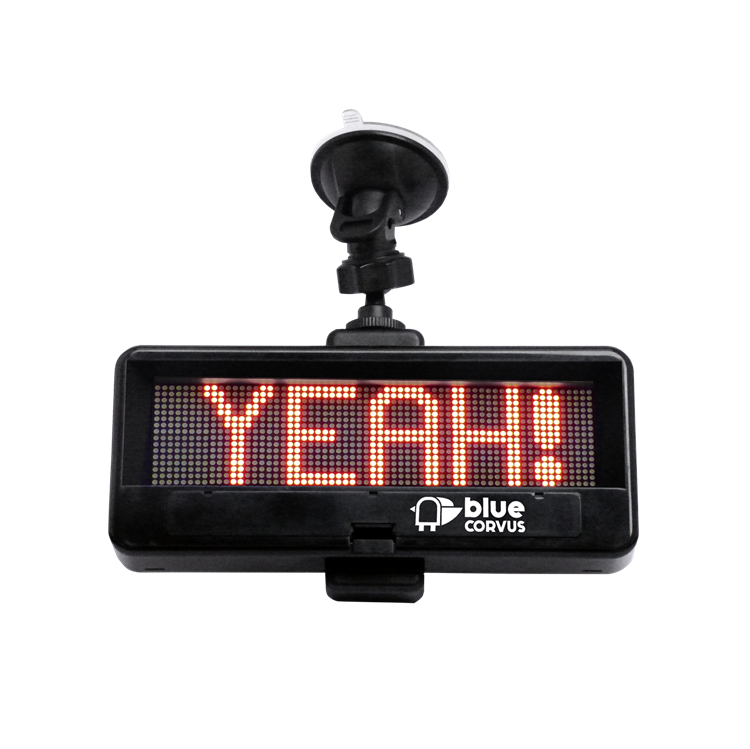 The 64 by 16 pixel (1024 dot) LED sign is designed to be suction cup-mounted inside the front or rear windshield of a car, and can scroll 20 programmable and reprogrammable messages, as well as simple graphics or any of more than 200 supported emojis. From the iOS or Android app, the user can select any one of 20 pre-programmed messages to display—for example “baby on board” or “thank you for letting me in”—as well as selecting from 32 different scrolling speeds and 16 different levels of brightness, allowing The Bird to be readable at a distance of up to 27 meters, even in bright sunlight. The user can also input their own messages using the keypad on their mobile device or via the ‘voice-to-text’ functionality. The Bird also offers multi-language support, as well as mirror mode, where the letters are displayed and scroll in reverse, allowing a driver in front to read the display ‘normally’ in their rearview mirror.

Thanks to the Bluetooth LE wireless connectivity provided by Nordic’s nRF52832 SoC, programming the LED display is easier and quicker than conventional LED displays, that either have to be directly cabled to a PC to program, or employ infrared (IR) remote control where letters are input one at a time, and must be programmed via line-of-sight access.

From a software point of view, we needed something that was well accepted and supported by the design community, and the nRF52832 SoC proved an excellent solution

“For The Bird, the ARM processor, huge memory, ample availability of I/Os, and the excellent sensitivity were the most attractive hardware features of the nRF52832 SoC,” says Michael Cosson, Blue Corvus Founder and CEO. “The SoC’s really low sleep current also means the user never has to worry about the batteries going dead while the device is not in use. The approximate 30μA sleep current translates to six to seven years of standby time from a fresh set of three AA batteries.

“From a software point of view, we needed something that was well accepted and supported by the design community, and the nRF52832 SoC proved an excellent solution.”