Are you thinking about integrating Matter into one of your products? If you are using one of our Thread-capable devices this will be easier that you think. Nordic devices put you in the ideal position to develop your Matter products. As the #1 Bluetooth Low Energy System-on-Chips (SoCs) supplier with a presence in OpenThread, Nordic is your ideal partner.

Nordic has a leading position in Thread/Bluetooth Low Energy multiprotocol. Our nRF52840 SoC and nRF Connect SDK 2.0.2 received the worlds first Thread 1.3 certification badge, that can be easily inherited by our customers and is a prerequisite for Matter over Thread, where Bluetooth LE is used to commission and Thread for data transfer. It is also possible to build a Thread-capable device now and include Matter support later with an update.

We offer excellent documentation and technical support to anyone developing a Thread product with our SoCs. We guide you through the product development process.

Thread was developed to have a reliable, secure, and scalable way to connect low-power devices. Thread is an IPv6 standards-based mesh networking protocol with no single point of failure. Like the Internet, Thread runs on the Internet Protocol (IP). As a result, Thread devices seamlessly integrate with larger IP networks. They don't need proprietary gateways or translators. This streamlines connectivity to the cloud or to consumers mobile end devices. 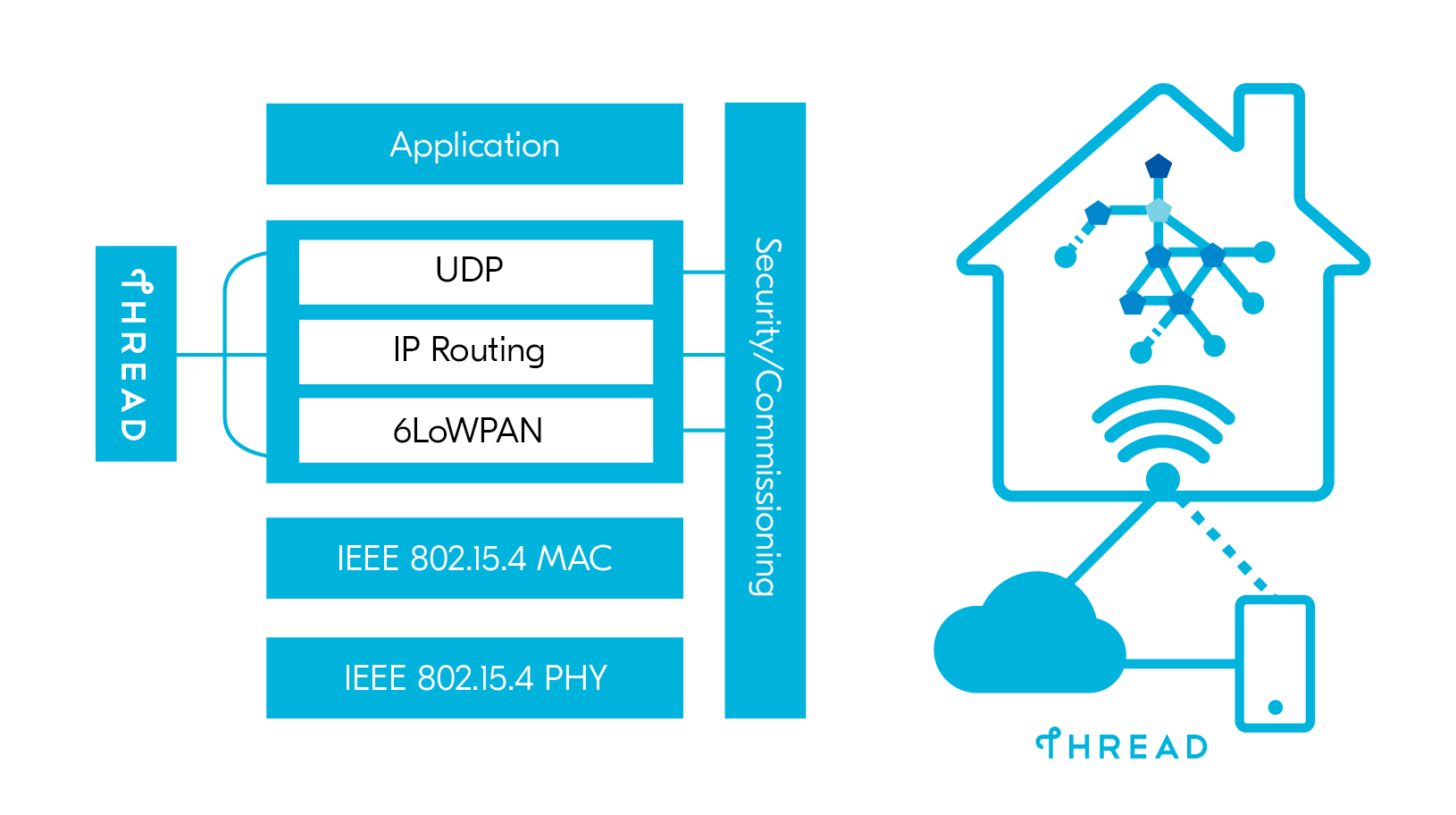 Low power wireless connectivity is a core competence of Nordic. We support OpenThread and are one of its main contributors. Our hardware products in combination with our software are Thread Certified Components.

With Nordic's portfolio, you can build a single chip device or use one of our smaller devices as a network coprocessor to build a Thread Border Router. The SoCs have different memory sizes and capabilities, for you to select the perfect match for your product. Thread protocol is application layer agnostic and does not define an application layer. As a result, it can support many IP-enabled application protocols. Nordic's Thread solution is a perfect baseline for Thread-based application layers: Matter, HomeKit, DALI+, KNX IoT, OCF, and others.

Secure and reliable connectivity. The protocol is designed to have no single point of failure and ensure interoperability through a certification program. It is also designed to scale from small networks to large networks.

Thread comes with security built-in for data traffic and commissioning. This is part of the specification, for Thread security is not optional, it is a requirement.

Thread's base is the power-efficient IEEE 802.15.4 MAC/PHY. It is ideal to support battery-operated devices.

n clDevice-to-device and device-to-cloud IPv6-based communication. Thread brings the Internet eveoser to the Internet of Things by using the Internet’s proven, open standards to create an Internet Protocol version 6 (IPv6) based mesh network.

The internet is based on IP technologies. Thread is extending those technologies to the edge devices of the network. This makes seamless integration possible. Cloud developers do not need to care or even know if it is a Thread device they are communicating with or a Wi-Fi device.

Thread is deployed in the market on millions of devices. Google Nest products have been relying on Thread for several years. Apple's newer HomeKit devices also use Thread. Besides that, Matter uses Thread in combination with Bluetooth LE.

Thread devices can be either a router-capable device (Full Thread Device – FTD) or an end device (Minimal Thread Device – MTD). This is independent of their device function. Usually, FTDs are mains connected and often MTDs are battery-powered and work as sleepy end devices. The role of an FTD in the network can change dynamically between router and end device to ensure the best performance. 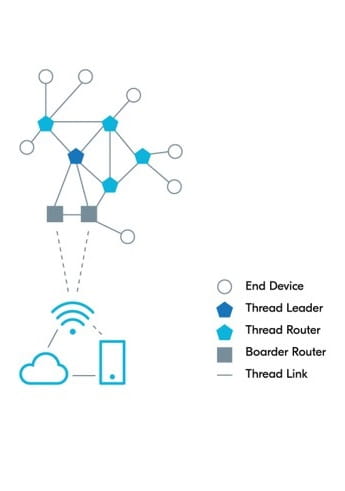 An End Device will communicate only through its parent router and cannot forward messages to other devices. End Devices can disable their transceivers to reduce power and work as Sleepy End Devices. The relationship between Router and End Device is a Parent-Child relationship. An End Device attaches to exactly one Router. The Router is always the Parent, the End Device the Child.

Thread dynamically elects a leader. Thread requires that all routers are capable of performing as a leader. If the leader fails, another router assumes the role.

Thread is resilient in maintaining connectivity to non-Thread devices. A Border Router is the Thread device that provides end-to-end, IP connectivity from the Thread Network to adjacent networks. Many mesh technologies rely on a single hub for external connectivity. To ensure resilience, Thread supports multiple border routers operating simultaneously. This provides redundant paths into and out of a network. Any Full Thread Device can provide Border Router services, even if the device is not currently acting as a Router in the Thread Network.

If you want to learn more about Thread we recommend watching our webinars in the More tab of this page.