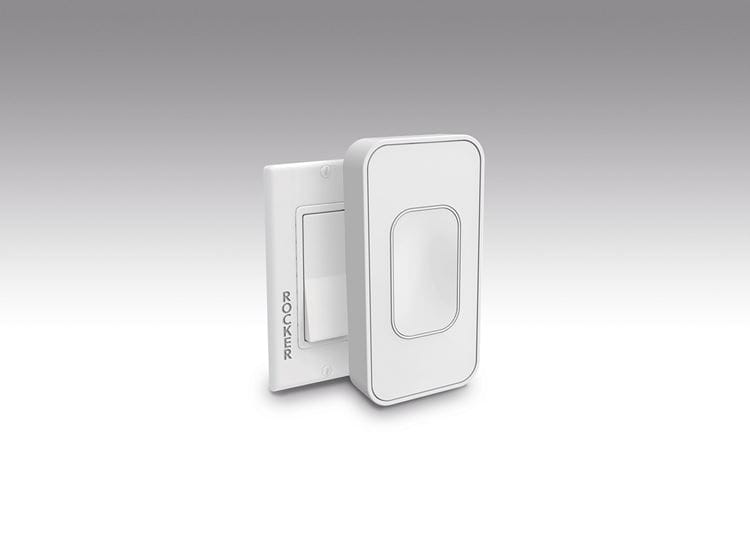 The Switchmate lighting device eliminates the need to replace existing light switches by snapping over standard toggle or rocker light switches using magnets to firmly secure it to the original light switch’s screws. The device is the only one of its kind that requires no hardwiring, tools, or Wi-Fi set-up, but rather employs Nordic’s nRF51822 SoC to provide Bluetooth Low Energy wireless connectivity to Bluetooth 4.0 (or later) smartphones, from where the user can remotely control the light switch via the Switchmate iOS and Android-compatible app over a range of approximately 45 meters. The lights can also be operated manually from the wall switch itself.

The accompanying Switchmate app allows users to customize and control their lighting preferences with the ability to add an unlimited number of Switchmate devices and pair to the closest one in range. From the app, the user can also set timers to automate their lighting when they are away from home, while a ‘welcome home’ feature automatically turns lights on as they enter a particular room. The Switchmate app also allows for voice activation of the switches via spoken commands, for example “turn bedroom lights on” or “turn lights off”, using standard iOS and Android voice APIs as well as Google Voice activation. The Switchmate device will also be compatible with Amazon’s Alexa Voice Service as well as the new Direct Action Google Home protocol.

Nordic was one of the early Bluetooth LE leaders with a sound reputation of delivering stable chips with regularly updated SDKs, and the stability and efficiency of the Nordic SoC was an important differentiator for us.

The Switchmate device is powered by two AA batteries, providing up to 12 months of standard operation between replacement, thanks in part to the ultra-low power characteristics of the Nordic SoC.

“Nordic was one of the early Bluetooth LE leaders with a sound reputation of delivering stable chips with regularly updated SDKs, and the stability and efficiency of the Nordic SoC was an important differentiator for us,” says Dean Finnegan, CEO and founder of Switchmate Home. “We found the range and power efficiency of the nRF51822 was the best in the industry and in my view, it is all about power management in the connected home space.”

About Switchmate Home
Switchmate Home was founded in 2016 in Pleasanton, Calif. by Dean Finnegan. After a successful indiegogo campaign in 2015, the company brought smart lighting to the everyday consumer with one-second installation. Now available in major retail stores across the U.S. such as Target, Home Depot, Walmart, Bed Bath & Beyond, Macy’s and Kohl’s, and online at Amazon.com, BestBuy.com and switchmatehome.com, Switchmate Home devices are able to fit effortlessly into each home, bringing user-friendly smart home automation to anyone. To learn more, visit switchmatehome.com.