It is our goal to have no form of human rights abuse or labor issue in any stage related to production of our products.

MODERN SLAVERY
Forced labor takes different forms, including debt bondage, trafficking and other forms of modern slavery. The California Transparency in Supply Chains Act of 2010 and The UK Modern Slavery Act of 2015 require certain businesses to disclose their efforts to address the issues of slavery and human trafficking in their supply chains.

Nordic, does not tolerate forced labor practices to be used in any of our operations, as stated in our policy. We require all suppliers to sign an agreement of adherence to RBA, and to promote these principles to the next tier suppliers. The RBA Code of Conduct explicitly bans trafficked and forced labor, as well as any form of child labor.

NORDIC SEMICONDUCTORS POLICY ON NON-DISCRIMINATION
All Nordic Semiconductor employees shall be treated equally and with dignity, courtesy and respect. Nordic Semiconductor prohibits any form of discrimination against and/or harassment of employees or applicants for employment due to race, color, nationality or ethnical origin, age, religion, disability, political opinions, gender or sexual orientation, as described by ILO conventions.

Nordic Semiconductor’s organizational culture shall be characterized by openness and good internal communication so that any misconduct or problems can be addressed, discussed and resolved in a timely manner. Nordic Semiconductor’s employees are encouraged to report any incident of discrimination to their nearest leader or through the applicable whistle-blower channels. Retaliation against any employee who has reported misconduct, is prohibited. There shall be no unfavorable treatment to any whistle blowers.

We are committed to the Ten Principles of the UNGC and to report on human rights, workers’ rights, the environment and anti-corruption 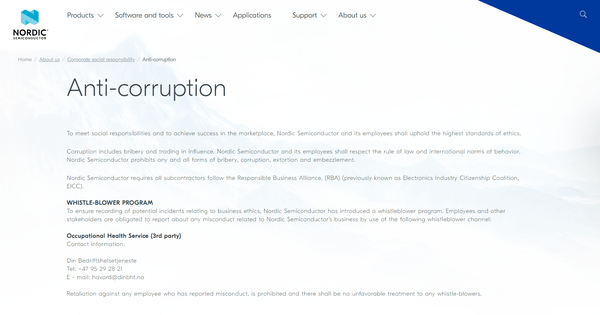 To meet social responsibilities and to achieve success in the marketplace, Nordic Semiconductor and its employees shall uphold the highest standards of ethics 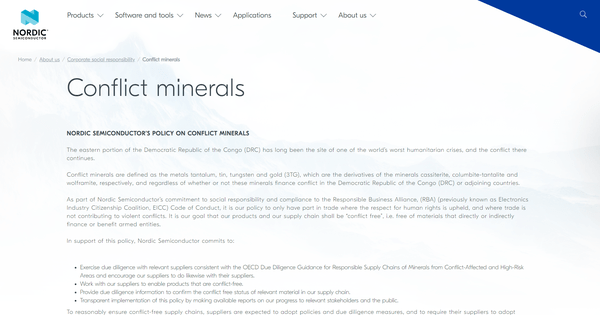 It is our goal that our products and our supply chain shall be “conflict free”, i.e. free of materials that directly or indirectly finance or benefit armed entities 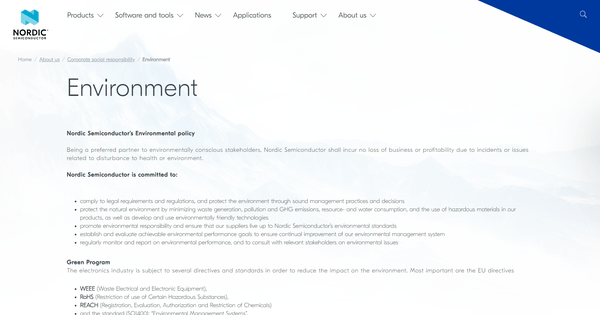 Being a preferred partner to environmentally conscious stakeholders, Nordic Semiconductor shall incur no loss of business or profitability due to incidents or issues related to disturbance to health or environment 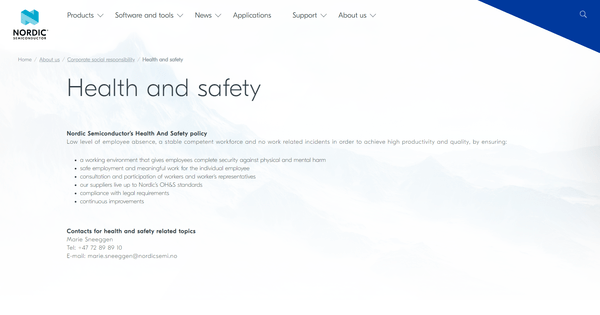 We are committed to low levels of employee absence, a stable competent workforce and no work related incidents 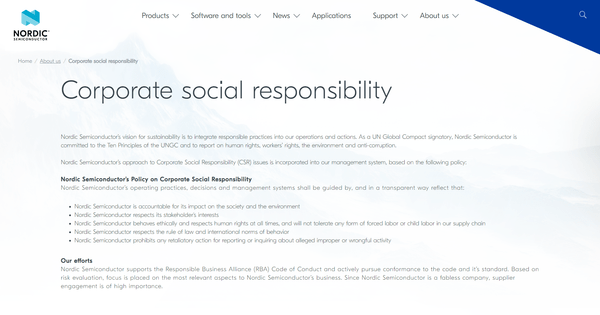